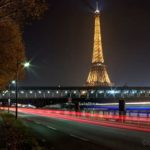 Looking back on my service in the RAF following my AATS initiation, I am conscious that the tedium of routine General Office life was often surprisingly – and pleasantly – interrupted by short-term detachments that came out of the blue to brighten up the life of a lowly airman. For example, I was once sent to live under canvas and partake in the national rifle championships held at Bisley. Accordingly I subsequently found myself lying prone on the cold ground miles from the butts and endeavouring to find the bulls’ eye with my trusted .303 rifle. Alongside me were the real professionals complete with proper kit (elbow pads, telescopes, etc.) who even had the audacity to challenge the markers (at a shilling a go if I remember correctly) when their shots failed to live up to their expectations.
During my time at HQ AFNORTH Oslo I was once detached to a Royal Norwegian Air Force station to provide clerical support for a bombing competition between squadrons of the Norwegian and Danish Air Forces. All good fun with international relationships cemented at the end-of-competition booze up.
I was even detached for a short time (can’t remember where) to assist in the forthcoming public showing of the film ‘The Battle of Britain’ which was graced by the presence of a famous foreign fighter pilot of the era. One bonus was that I got to see the film before most of Joe Public, although today there can be few people who have not seen it thanks to frequent showings on TV.
However, the one detachment I recall best came about in the 1960’s (I think it was 1966) when Record Office received a request for a Clk Sec to go to Paris for a month or so. I don’t know the names of my benefactors but someone holding a 593 number in Gloucester nominated me, and for that I would like to belatedly thank them.
Accordingly, after the boat train to the Gare du Nord; being collected by a Wing Commander; and finally ensconced in a local hotel (complete with slow-moving and creaking cage of a lift) I woke the following morning to find myself in Paris. Wonderful! Over the next weeks I explored the city as fully as possible, going up the Eiffel Tower, trawling the left-bank bookstalls, visiting Notre Dame and Sacre-Coeur, the flea market (amazing) and the Louvre (where I initially walked right past the Mona Lisa – such a small and insignificant painting). I also checked out the Jeu de Paume and adored the works of the impressionists. In short, I fell in love with the city. My one downside was having to travel on the Metro after the French had had their lunch – the smell of garlic was chemical warfare at its worst!
So what was it all about? It turns out that in an era before the dreaded word ‘diversity’ had come to plague our lives, the military were actually acting as standard-bearer for this concept and trialling it in Paris. Our Working Group comprised a number of officers from NATO countries, headed by an American Admiral. We had a couple of RN nuclear submarine officers, 3 or 4 Americans (they came and went from time to time), a Dutch naval Captain, a German Kriegsmarine officer, even a representative from Turkey (but NO French). To service this motley crew the secretariat consisted of an American naval Lt Cdr, a Chief WREN, a lady Warrant Officer from the Army, and yours truly. I was completely outranked but I was the best typist! We occupied rooms in the American Embassy overlooking the Place de la Concorde.
To emphasise our diversity credentials even further, the Working Group was tasked with drawing up a feasibility study to ascertain if the notion of mixed-manned crews (ie made up of differing nationals) would be a sensible future trend for our submarines and V-bombers!
Whatever you might think of the notion (and I thought it was barmy) they went at it with great gusto, producing an Interim Report later which rivalled ‘War and Peace’ in its bulk (if not in its literary merit). This milestone was marked with a party whereby each nationality brought a representative beverage of their home country) We in the secretariat worked long hours in our bunker churning out pamphlets and papers summarising the various aspects of our mission. I often had the feeling that we were cut off from the busy life of the great city flowing past our windows.
However, life has a habit of penetrating this sense of isolation. Ours came when the wife of an American officer arrived completely unexpectedly at Orly airport. She made the trip over the pond because she was responding to rumours that had circulated in Norfolk, Virginia. This had absolutely nothing to do with the announcement of a sale at the Galleries Layfayette, but was down to an ex-member of the Group who had indicated on his return that Gay Paree was awash with hanky-panky! A tense time followed and at least one officer had to think fast. Well, it was the Swinging Sixties after all.
In the end our combined efforts concluded with the universal decision that the concept of mixed-manned submarines and V-bombers was not really feasible. I do not recall all their objections but one of them centred on the requirement to provide English tuition to the happy warriors. A final tome was produced by the exhausted Secretariat (which presumably resides in some pigeon-hole gathering dust) before we all returned to our country of origin and resumed our mundane lives.
September 2022