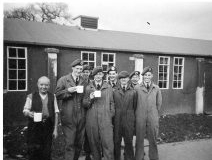 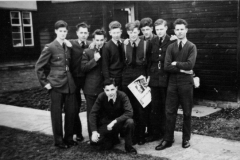 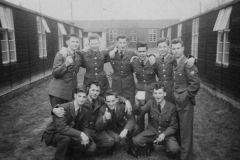 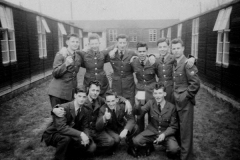 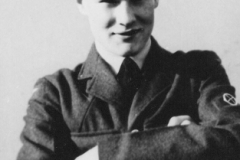 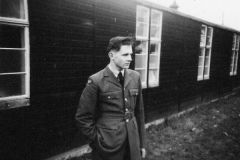 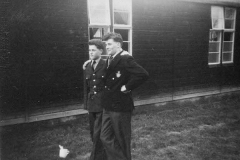 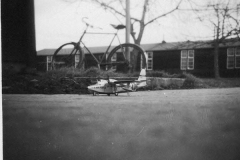 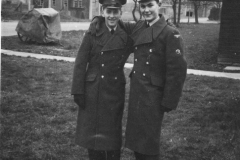 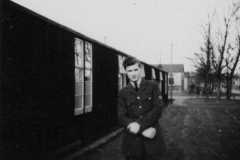 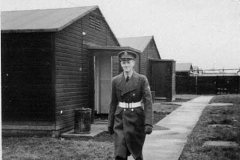 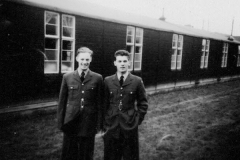 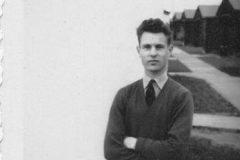 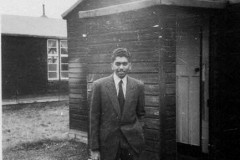 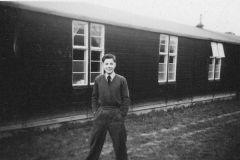 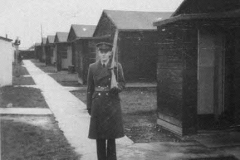 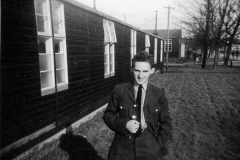 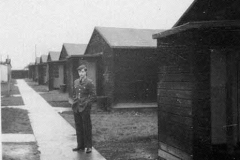 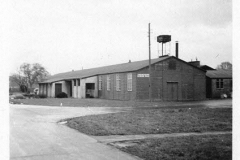 Dieter Batten was known in 1957/58 as Peter Willis and he trained with the 31st Entry. He took the photographs shown in this gallery while at Hereford in 1957. Since leaving the RAF in 1958 Dieter has lived in his native Germany.

Links to this gallery is posted on both the 31st Entry Scrapbook page (albeit some of the apprentices shown in the photos will be  members of other entries training at Hereford at the time) and also on our RAF Hereford page.

It gives me much pleasure to introduce this article provided by Dieter Dappen in September 2020. We worked closely together to put together his very personal recollections which I hope you will find interesting. It is also nice to have been able to re-establish contact with another ex-Admin Apprentice who was at AATS Hereford with me in 1957.

In 2017 Dieter first made contact with me via Association Website after which he provided me with what now forms the above album of photographs –  a treasure trove  of images he took while an Admin Apprentice at RAF Hereford in 1957/8. A number of these feature the 27th Entry pass out parade.  In September 2020, a former work colleague of his also contacted me with a view to finding his whereabouts. My correspondence with Dieter on this matter revealed some interesting information about his life and background which he has agreed to share with us.

Dieter Dappen was born in Krefeld/Germany the son of a WW2 German naval officer Wilhelm Karl Dappen. His parents divorced at the end of the war and his mother remarried a British army soldier in Krefeld in1948. His name was changed to that of his stepfather through naturalization as a British subject, to Peter Willis.

Coincidentally, Dieter was also at the British Army boarding school in Germany in 1952 (the Prince Rupert in Wilhelmshaven), where he and Harry Trumbell (29th Entry) met for the first time as junior pupils in  Matthew House.

Dieter originally aimed for a career as artificer shipwright apprentice in the Royal Navy. He successfully completed the entrance examination but failed the subsequent medical check as result of inborn colour blindness. He then tried the RAF for a technical apprenticeship as an aircraft electrician. The medical check after passing the entrance examination again revealed the same  result, namely colour blindness. However, the examining medical doctor at the recruitment centre inferred that the defect might only be temporary and suggested Dieter joined up as an Administrative Apprentice with an option to apply for a technical apprenticeship after basic training. Regarding this as a good proposal, Dieter signed up and joined the 31st Entry in 1957 as a u/t Clk Sec. Unfortunately, his renewed application for a technical apprenticeship was not approved for the same medical reason. Disappointed, he left the RAF on 18th Feb 1958 without completing his course.  He promptly returned to his place of birth, Krefeld in Germany, reassuming his given birth name of Dieter Dappen.

The Following Is Dieter’s Story

The marriage between my mother and British soldier stepfather, came as a complete surprise and which confronted me suddenly one day with a stranger who did not speak German. It totally bewildered me as an 8 year old. Despite my mother’s explanations I still felt in a state of limbo for quite some time not realising at the time how this was going to change my life completely. The first measures thrown at me to learn English failed miserably. The private teacher my mother engaged, was “ein alter man “(an old fuddy-duddy), ill-tempered with no patience. The hourly lessons twice a week were absolute torture, I learned nothing except repeating ‘the’ in mantra fashion. Mercifully, my mum saw nothing was being gained by continuing this arrangement and subsequently terminated these lessons after a month or so. Communicating with my new dad remained a mixture of pidgin -talk and sign language, very amusing at times!

However, things were to change.  My stepfather re-enlisted into the British Army again after being demobbed at war’s end and allocated an Army married quarter in Viersen, very near to Krefeld, on an estate where other British Army Soldiers with their families lived.  This brought me together with English children and soon helped me to pick up enough English to talk and play with them – children learn fast.

With my English steadily improving, the time was right to change from my German school, to a British Army School. My primary education continued in English to the age of 11. Regardless of this, my mother always spoke German with me to keep bi-lingual, a marked asset in later life.

Completing primary education the end 1951, my stepfather sent me to the British Forces Boarding School, named Prince Rupert (referred to as PRS by its pupils) in Wilhelmshaven on the North Sea Coast. All British forces dependants over 11 years were went to this establishment to complete education to grammar or secondary modern grade.  PRS was set up 1947, in a commandeered ex- Reichsmarine Naval Base that housed the 23rd U-Boat Training Flotilla. Not known to me at time, this was the same barrack where my real father was stationed from 1944 to 1945, ending the war there in British captivity. Again unknowingly, it was also the first of two coincidences, where my real father and I crossed paths.

It was in 1958 after leaving the RAF that I would meet my father for the first and last time. He had invited me to his home in the town of Neersen, very near to Krefeld where I lived, to meet his new family and talk about us. It was then that my father told me, after hearing how I had fared since he and my mother parted, that he too was at Wilhelmshaven in the same barracks at which I went to school. I am sorry with hindsight that I did question him on his naval experiences in the Reichsmarine from 1936-1945. I guess it just did not come to my mind at that time. Besides, the man who had invited me was practically a total stranger, who I was seeing for the first time. We simply parted, never to meet up again. I found out much later that Father had passed away mid 1980 after a heart attack.

Mother never talked to me at all about my father when I was young. However, a year before she died, she felt she owed it me, to tell me more about my real father and the kind of person he was. This began to arouse my interest far more. Curiosity deepened when my wife and I moved from  Krefeld, where we had lived since 1958, to Gelting, a town between Kappeln and Flensburg on the Baltic Coast, a place we mutually selected to spend my retirement (2002). Mother had mentioned that my father applied 1943, for a technical officer’s commission to transfer to U-Boats. He was accepted into the Reichsmarine Officers Training Academy at Mürvik near Flensburg. This establishment still trains future German naval officers today. The Academy is 35 kms distance from Gelting, the place where my wife and I lived since my retirement at the beginning 2002. In 2013 we moved to the town of Süderbrarup, in the district of Angeln in the province of Schleswig Holstein, where we still live today. This move linked me for a second time with my father, who was stationed for a time in Mürwick, Eckernförde and Kiel during the war. Mother told me once, we both visited him in Mürwick probably in 1943, during his officers training there.  I was 3 years old, much too young to recall this.

My father left the Academy in Mürvick a commissioned Ensign, probably equivalent to an acting midshipmen.  The photo of him in dress uniform seems to confirm this, He underwent further training at the Torpedo School in Eckernförde (28 Kms from Süderbrarup), (which is still an active German Navy T-Base today training Submarine crews), before being posted to a U-Boat Flotilla at Kiel for active service in the Baltic Sea sector.

A visit to the Naval archive also housed in the Officers Academy at Mürwick, established by Kaiser Wilhelm the 2nd in 1905, put me on the right track for more information about my father. The curator at the naval archive establishment, who I approached for information concerning my father’s time there, advised me to approach the Federal German Forces Records Archive in Berlin, where military records of all personnel who served in both world wars are kept. After identifying myself as the natural born son of Wilhelm Karl Dappen, the Archive subsequently sent me a copy of his Naval Record Sheet showing everything I wanted to know.

However, all entries in this sheet are in Sütterlin handwriting, a script ruled by Kaiser Wilhelm in 1915 as mandatory and official. The Nazis abolished this 1942 from when writing was only to be in Latin form. My parents and grandparents could read and write Sütterlin. I never learned it in German school. Anyhow, using the Sütterlin alphabet published on the Internet, I believe I have correctly translated into English, all the basic entries in father’s record sheet showing good picture on how he fared during his time 1936 to 1945 in Reichsmarine.

Several photos, mother had given to me, show him in uniform as a seaman and later as a commissioned officer. However, his record sheet unfortunately does not state the number(s) of the U-Boats at Kiel or Wilhelmshaven he actively served on, probably for security reasons at the time. The Archive in Berlin also has no respective crew listing records. Consequently only crew members on U-Boats based in Wilhelmshaven might enlighten here, if still living that is. My father was born 29th April 1916 and would be 104 years old today. Nevertheless, I am fully satisfied with what I have found about Wilhelm Karl Dappen who I never really got to know, except one the one short meeting in 1958. I can well live with two souls in my body and have made the best of both worlds.  I am still a “dual national”, holding a British and German passport.

A Covering letter I received with the copy of the fathers Record Sheet dated 15.06.1946   states:    ‘Wilhelm Karl Dappen crew member belonging to the 23rd U-Boat Training Flotilla/ Wilhelmshaven,  made prisoner of war by the British Forces, was released back into civilian life’.

I offer this article, at request of Alan Bell, RAFAAA Website Manager, for publication on the Administrative Apprentices Association Website, for members and anyone who interested, to read. I may add here that a former pupil at Prince Rupert School in Wilhelmshaven, Cyril Clark (Howe 1955) has also questioned me on the subject matter above He learned of it when I submitted an article on myself with an application for membership of the PRS Wilhelmshaven Association.

It seems to me from what Alan tells me, there may be quite a few people interested the topic of German U-Boats!

Personally, I can recall seeing U-Boats, sunk in Wilhelmshaven harbour base by Allied air raids, being raised to clear the harbour basin. We boys often stood when possible at the fence surrounding the school in the main barracks, to watch scuttled U-Boats lifted to the surface. It could well have been that I witnessed the raising of a U-Boat my father could have served on.

My investigation into the life of Wilhelm Karl Dappen ends on this note.