This page is dedicated to posts, photos and videos related to the annual Remembrance Day Parades at the Cenotaph in London and at other venues both in the UK and Abroad . If you find yourself there in  there either in an official capacity or simply as a visitor and wish to contribute to this page, please feel free to do so. We wouild particularly like to receive your photos or videos taken on the day. See below for further details as to how this can be done.

The 2017 parade was well attended with 8 members representing the Association. The 29th Entry provided the biggest contingent with 4 members. Bryan Hoare (307th) and Dave Johnson (313th) were also on the parade. (Roy Pipe (29th) although not able to march, nevertheless organised lunch at a local pub close by.

The Association was again represented at the Remembrance Sunday parade at the Cenotaph on 11th November. This year it was also marking the 100th anniversary of the signing of the Armistice that ended the First World War.

I am sure you will all agree with me that this year’s events marking the 100 anniversary of the signing of the Armistice ending the first world war, has been quite extraordinary. The moving BBC Festival of Remembrance on Saturday evening and the ceremony at the Cenotaph yesterday captured the hearts of the nation. This has been borne out by the numerous events organised across the country from large towns and cities,  to the smallest of villages. I would very much like to post your own thoughts, videos or images depicting this special day. Also you can communicate with us via our Forums Page:

so I do hope that you will take advantage of this and post your comments.

Across France where I live, there were similar ceremonies and our our little rural village in the Charente was no exception. We have a small British expat community and we were well represented yesterday at our local village war memorial. Normally, our mayor talks mainly about the French participation in both world wars and  the deaths of the 15 or so members of our village. This year, she unexpectedly then asked if any of us Brits would like to say a few words. There were no immediate takers so she simply handed the microphone to me! I had no choice, so after thanking her for the opportunity, I spoke briefly about the need for us as a community to also remember to pay homage to British servicemen and women who lost their lives in both world wars and in later conflicts. A suggestion that we then sing God Save The Queen was thankfully not taken up, not out of any disrespect, but simply the unpreparedness of the request.

We have decided that next year we will provide a separate wreath to be laid on behalf of the British ex-pat community.

I am posting a couple of photos of our ‘parade’ 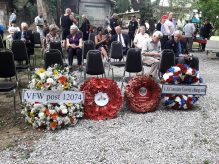 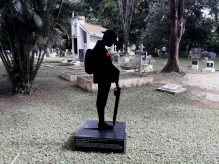 Just thought you might interested to know that there was a moving Remembrance Day service here in Chiang Mai, northern Thailand held as usual at the Foreigner’s Cemetery followed by a buffet luncheon at the Gymkhana Club next door.
The service was very well patronized including the Chiang Mai British Legion; Chiang Mai Honorary Consuls representing the British, Australian and Canadian governments together with the USA Chiang Mai Consul General; Boy Scouts and local international schools; who all laid poppy wreaths in front of the memorial stone after the service and two minutes silence.
The silence was heralded in with the Last Post played by a sergeant bugler from the Thai army and concluded by him playing Reveille.
After the consuls, scouts and schools had laid their wreaths we all took turns to lay our individual poppies on the memorial stone in silent memory of all those who made the ultimate sacrifice for us all to live in freedom today.
I wore my RAF Administrative Apprentice tie as usual and met another gentleman there wearing an RAF tie. We had a lovely chat before the service started and it transpired that he had been a Boy Entrant signaler from RAF Cosford, who was just a year younger than me, but with a much longer and distinguished career in the RAF spanning many theaters of war, proudly wearing his medals to prove it!
There was also a retired ITN cameraman there filming the whole event whom I was fortunate enough to dine with at the Gymkhana Club luncheon afterwards. He later kindly sent me the video he had recorded, which I will include with this e-mail if possible together with some of the pictures I took at the service in the Foreigner’s Cemetery.
https://vimeo.com/300249378
Remembrance Day Romford November 2018 – David Ainsworth 304th

I read that well-known verse (4th verse) from “For the Fallen” by Laurence Binyon on Sunday.  I was approached as organisers of my local Remembrance Day Service wanted an ex-Regular Royal Air Force serviceman to read the words, as it’s also the centenary of the RAF itself this year.

Our Royal Air Force Administrative Apprentices’ Association tie is well to the fore!

Your pictures, posts or comments can be posted directly to the website here:

John Davies (303rd) in his role as Chairman of The Not Forgotten Association Northern Ireland laid a wreath at Belfast City Cenotaph at the National Day of Remembrance Service on Sunday, 11 November 2018.    This photograph shows John (centre) returning with the main procession to Belfast City Hall after the event.