The Dorset Group is still flourishing and doing well. There are six of us altogether, two from the Isle and Royal Manor of Portland, two from Christchurch, and one from each of Sherborne and Poole. To make travelling fair we move around the county for our meetings with the Portland meeting being on the last Saturday of February, Sherborne the last Saturday of May, Christchurch the last Saturday of August and Poole the end of November. Should any of you wish to join us on any of the occasions let me know, you would be more than welcome. Sometime in the past we were joined by John Gent from Andover, but because of poor health we have not seen him for sometime. Hope you are feeling better John, you are missed.

On the 11th June (we had to re-arrange the date to suit all) we met at the Half Moon Inn on a bright and sunny day. The Half Moon Inn is directly across the road from the beautiful Sherborne Abbey in this lovely old Dorset town which which was once the home of no less than Sir Walter Raleigh who resided in a local castle. Unfortunately Shay Foley our normal organiser was unable to attend due to ill health. Those who attended were John White (13th Entry), Tony Richards (14th Entry), Peter Reed (30th Entry), Tony Peters (34th Entry) and Mike Hamill (40th Entry). A good meal, a few pints and a great deal of chatter was enjoyed by all.

The “saga” of Christchurch happened on the 13th August. Peter Reed and Tony Peters left Portland at 1000 hours and collected someone who shall be nameless from Poole about an hour later. The nameless one then took over the navigation as he was local and new the area well. After an hour, driving through extremely heavy traffic we arrived at a pub, went in and had a round of drinks and started to recover from a very hot and tiring journey, this was at about 1230 hours, the time we had agreed to meet, We chatted for a good half an hour and by this time I was worried that the two hosts had not joined us. The venue for our meeting was the Crown Inn at Bransgore. As we were worried, Peter Reed asked one of the pub staff if we were booked in and if they had seen the other two, the answer was “No”. To be on the safe side Peter then asked if this was the Crown Inn, the answer was “No, that is at Bransgore a few miles further on”. We obtained instructions on how to get to the Crown and eventually arrived there a little late. Our navigator then bought us around of drinks, almost identical to what I had purchased at the previous pub and it cost him about £2 more than what I had paid. We had an excellent meal and a few drinks, put the world to rights (political correctness was not observed) and and had a most agreeable time. On leaving Peter Reed wisely decided to use his Tom Tom navigator and we had an almost traffic free journey on a very picturesque route that passed Hurn airport. It was nice to see aircraft up close again. Hurn airport has one of the longest runways in the country and until Heathrow was built on an ex RAF emergency landing ground was used as London Airport. Until it crashed, it was also where the the flight testing of the Valiant bomber was carried out. Altogether it was a chaotic but most enjoyable day and to finish off in true style I realised that I had left the pub without paying and had to send a cheque to cover my error. Those who attended on this occasion were John White, Tony Richards, Peter Reed, Tony Peters and Shay Foley (46th Entry).

Our next outing is scheduled for the 26th November at the RNLI Headquarters at Poole.

Best regards to all our members, Tony Peters and the Dorset Mob.

This report has been submitted by Tony Peters (34th) on behalf of Shay Foley who is currently having some health problems.  Shay has asked Tony to take over until such time as he recovers.

The Dorset group of ex administrative apprentices met at the Half Moon Inn on the 11th June in Sherborne on a bright sunny day. The Half Moon Inn is directly across the road from the beautiful Sherborne Abbey in this lovely old Dorset town which once was the home in a local castle of no less than Sir Walter Raleigh. Unfortunately, Shay Foley (46th Entry), our normal organiser, was unable to attend due to ill health and we all wish him a speedy recovery and hope that he is able to join us on our next outing. Those attending were John White (13th Entry),Tony Richards (14th Entry), Peter Reed (30th Entry), Tony Peters (34th Entry) and Mike Hamill (40th Entry). A good meal, a few pints and a great deal of chatting was enjoyed by all.

Our next meeting will be on Saturday the 13th August at the Crown Inn, Bransgore, Christchurch, BH23 8AA at 1230 hours for 1300 hours. If any of you should be in the area why not join us for an hour or two.

The Dorset Branch of the Association held its first meeting since the lockdown 19 months ago. We met in the HQ of the RNLI in Poole on Saturday 18th September 2021. Those in attendance were: John White (13th), Tony Richards (14th), Peter Reed (30th),Tony Peters (34th), Mike Hamill (40th) and Shay Foley (46th).
The next meeting will also be in the RNLI HQ on Saturday 27th November- 1230 for 1pm. Dress Casual

The Dorset Branch held its quarterly meeting in The Ship in Christchurch on Saturday 24th Aug 2019.

Website Manager Note: I am hoping that Shay will be able to provide me with a photograph taken at this meeting. 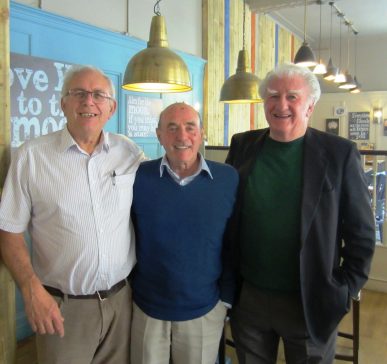 It was my turn to host our 3 monthly get together. It was held in The Half Moon Inn in Sherborne, where, though we were a bit short of troops due to the May Bank Holiday and Shay Foley convalescing from an “op” on one of his legs, we enjoyed a good natter.