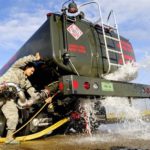 My first posting on completion of my Apprentice Training, in April 1955. was to RAF Leuchars. Shortly afterwards I was rostered for my first Duty Storeman. Leuchars received all its aviation fuel by rail tankers, the rail track ran right alongside the Equipment Section, that’s what it was called in those days. Just before 1700hrs the Warrant Officer i/c Fuels called me in and informed me that they had been unable to off-load a rail tanker of Avtur before 5pm. I was told that after I had locked up I was to empty this tanker into a fuel installation about 40 yds away. He said it was quite a simple task as the rail tanker was already connected up to an empty tank in the installation, all I had to do was hand pump the fuel for 3 or 4mins then gravity would take over. The transfer would take about 25-30mins then I could turn off the valves. I used the hand pump until I heard the fuel flowing and left to read a newspaper whilst gravity did its work. About 20mins later I decided to wander out to see how things were going, as I approached the tanker I could smell fuel. This was worrying. I then saw a “colourful fountain” in the centre of the fuel installation, fuel was pouring out of a vent pipe. I quickly closed the valves. The tanker had been connected to full tank of fuel by mistake. I did not sleep much that night. The following morning I explained what had happened to the Warrant Officer, his comment was “forget about it lad, I will sort it out.” I heard no more about the incident, other than 2000 gals of Avtur. had been lost. On reflection I should have checked the receiving tank had sufficient ullage to take the fuel. The moral of the story is DO NOT ASSUME

Another Fuel Story – Peter Follett (20th) Early in 1958 I was the Orderly Sgt at RAF Idris, Libya, when I was informed there was a fire in the MT Section. Leaping on my bike I raced to the MT Section arriving the same time as the fire engine – to find no fire. The duty driver told us he had been in the office when he had heard an explosion, on investigation he found the petrol pump used to refuel vehicles had disappeared and there was a small fire where the pump had been. He quickly put the fire out with a foam extinguisher. The petrol pump or what was left of it was found about 30 yds away. Whilst we were trying to work out what had happened one of the firemen went to use the toilet. He came out looking rather green and said we had better have a look inside. The ceiling, walls and floor were covered in runny poo. The mystery deepened. The subsequent inquiry established that when the camp had been built in the 1930’s by the Italians, the petrol tank had been buried alongside a cess pit tank. Both tanks required a vent pipe to avoid a build up of gases, these vents had been correctly fitted. However, these vents had been joined together so that there was only one vent above the ground. Everything had been fine for over 20yrs ,but on that day the mixture of methane gas and petroleum gas was just right to create an explosion. This had blown back through the petrol tank and blown the pump away creating a small fire of escaping gas. It had also blown back through the cess pit and blown sewage all over the toilet.

The good news was that a vehicle was not being refuelled at the time of the explosion and nobody was using the toilet!