‘It was never like that in my day’ my Dad would say grumpily as we entered the Rock and Roll era in the mid 50s and then the Swinging 60s. ‘Teddy boys and winkle pickers, what is the world coming to?’

I was reminded of that when, the other day, my own son (now 56) and I were discussing how the moral compass of successive generations is more than likely entrenched in your psyche pretty early in one’s life.

As far as the Rock and Roll and Swinging 60s phenomenon was concerned, my father believed it was the beginning of the end of life as he knew it and suggested that military service was the only way to straighten out the youth of the day.

Of course he did not allude to what his parents (my Grandparents), would have said about the antics of the swing dancing, jitterbugging craze that swept the nation in the 30s and 40s. To them the so called Golden Age with its Jive, the Lindy Hop and the Charlston would have been nothing short of a nightmare of moral decadence!

My dad, being in the RAF at the time the craze hit the UK, would have had to have been a saint if he did not spend a great deal of his own leisure time jitterbugging along with the rest of them! Therefore, his indignation at the very thought of his offspring (particularly his 3 young teenage daughters) going out dancing and enjoying the music of the 50s and 60s would have been just a little hypocrytical. 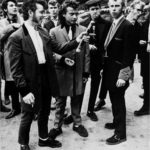 Most young people naturally want to have fun and for us in the AATS at Hereford in 1957, we were no exception. Flaunting the rules was a science and I well remember taking full advantage of a loophole in the regulations regarding the wearing of civilian clothes. Blazer, white shirt, RAF tie and grey flannel trousers was the order of the day, but nothing mentioned about shoes and socks. So, off I went to the Saturday night Rock and Roll sessions in the town wearing as ordered: Blazer, white shirt, RAF tie and grey flannel trousers. The finishing touches were however, the Teddy Boy brothel creepers and pink luminous socks.  Somehow the DIs never discovered the quiff always hidden under my beret! I fondly remember Sgt Joe Salter, our beloved and much parodied DI (with his face practically up my nose), once telling me on discovering my luminous socks hanging up over the stove, : ‘Bell you will come to nothing. You ain’t nothing but a Teddy Boy wot are you?’

All too quickly it seems now, it was my turn. Married in the early 60s with two kids by 1970. By the time they were teenagers in the 80s, times and attitudes had changed yet again. Punk rockers with bones in their noses and rings in their ears and, as far as I was concerned (with a few notable exceptions), some pretty awful heavy rock music blaring from their bedrooms. My two were typical and like me at their age, quickly became adept at finding ways round the rules. When caught out of course, they moaned when they were grounded and I was naturally accused of being ‘a square’. Nevertheless, as a parent myself I clearly felt it necessary to lay down certain red line ground rules that undoubtedly stemmed from those laid down by my own parents. These of course were considered draconian and were not much appreciated by my kids at the time. Surprise! Surprise! However, luckily they have both become responsible parents themselves and are now engaged in their own generational battles with their children.

Now in 2021 we appear to be in the midst of yet another generational sea change in societal attitudes.  Would I be completely out of order to suggest that it may be proving just a little difficult for many of our generation of oldies to agree with many of these changes? Time stands still for no man of course and no doubt the next era of change is already lurking round the corner!