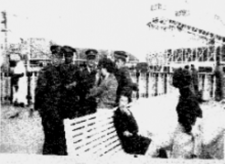 The article by Dave Tinley jogged my memory about a few things that happened in the summer of 1956 after we arrived at Porthcawl by train from Hereford.  We marched smartly from the railway station, through the town, and finished up in a field which sloped down to the sea and some rocks.  I believe the tents were already pitched, so we were able to get an ” al fresco” meal, which was not too bad.  Dear old Joe Salter then got us together and outlined duties and routines. I was on pee buckets with Dave East. ( It was said that this was because we were considered to be the most delicate pair in the 25th Entry!)  The weather was quite good  but, as a result,  my hay fever became troublesome thereby providing ammunition to the tag of being” delicate”  Later in the week a few of us got the chance to get into town where we met  some local girls at the funfair.  ( See photo in 25th Entry scrapbook).  However. they soon got fed up with us so we just amused ourselves on the various swings and roundabouts. Just before we left Porthcawl,  F/L Jennings took us on a GST night stealth exercise but, as we crept by a farmhouse, he tripped and fell over a low stone wall.  His loud expletives woke the resident dogs  and, as a result, the farmer himself appeared with a lantern and shotgun. He gave Jennings a piece of his mind, whist we stood around stifling our laughter.  (We were later told, in no uncertain terms, to forget the whole incident on pain of death!)