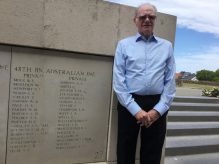 Earlier this year the Commonwealth War Graves Commission  stated that it would hold a commemoration ceremony at Tyne Cot military cemetery in Flanders on the 31st July 2017 to remember the battle Passchendaele, (the 3rd battle of Ypres). There would be a ballot for those who would like to attend restricted to 4000 tickets. Those who had relatives who had fought and died in the battle could apply.

My second cousin 3610 Private Francis Harold Souter (Harry),  48th Battalion Australian Imperial Force was the son of a doctor from Adelaide, South Australia. enlisted in the Australian Army on 24th August 1915.  In July 1917 he found himself in the Ypres Salient awaiting the big battle to come, as part of the II ANZAC Corps.

On the 12th October the Australians where to spearhead an attack on the well fortified German positions on Passchendaele Ridge. At dawn the attack began, soon after torrential rain began to fall, adding to the already sodden ground over which the battle was to be fought.  There was to be a creeping artillery barrage to dislodge the Germans, behind which the infantry were to advance. Due to the rain and mud the artillery became bogged down , the barrage was from the start sporadic and nor very effective, the shells exploding harmlessly in the mud, , and finally it was non -existent  Poor communications and inadequate intelligence meant  that the infantry advance continued with massive casualties. The attack was a complete failure. The 48th suffered more than 50% casualties, and at the end of the action my cousin Harry was posted as missing. A subsequent enquiry pronounced him “killed in action”. His remains were never found.

Passchendaele was eventually captured on the 10th November.

My wife and I were successful in CWGC ballot and duly attended the ceremony at Tyne Cot.  Which was attended by members of both the British and Belgian royal families and ministers from the two governments, together with representatives from all the Commonwealth countries whose troops had participated in the battle. The ceremony itself was extremely emotional. and moving, I found the reading, by the relatives,. of the names and letters from deceased soldiers to their friends and family at home  particularly poignant. The whole commemoration was in keeping with the solemnity of the occasion, and entirely appropriate.

The following day my wife and I visited the site of the battle of Polygon Wood, (where the ANZACs were involved in  another costly battle). it has it’s own war cemetery, and the Australian  Forces memorial.  It is a place of peaceful contemplation now, far removed from the appalling carnage of 100 years ago. finally we visited Menin Gate where Harry’s name  amongst many thousands of  others , is inscribed as having no known grave.

God bless you Harry. The cousin I never knew.

You did your duty.