The Job Interview – Grahame May (25th) 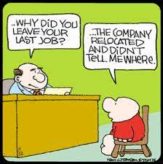 During my long and undistinguished career, I was always amazed by the way some companies, both large and small , could be so inept when it came to interviewing candidates for advertised positions.   I have experienced, for example, incompetence, bad manners, stupidity, condescension, ignorance and downright rudeness,  both as an applicant as well as an interviewer. Here are a few examples. They are in no particular order but would probably be between about 1968 to 1998. I have included the fifth one –the nicest interview –as a contrast.

I once travelled forty miles, in quite bad weather, to the Head Office of a medical supplies company only to be told that the Personnel Officer was not yet back from lunch. He eventually arrived rather inebriated, and obviously unfit for duty.  I left the premises without receiving a single word of apology from anyone associated with the company.

Around the same time I  had another, so called interview, on two orange boxes in the middle of a cold and draughty warehouse at some company, the name and  location of which I cannot recall.     (” Sorry about this old son but I am having my nice new office redecorated – you know how it is!”)  I did not know how it was, nor did I understand the mentality of someone who thought an interview, for any position in a company, could be conducted in such a thoughtless and offhand manner.

Being wrongly identified as a candidate for a job can be scary. I remember arriving at Kings Cross Station at 8 am on a Monday morning, having travelled down on the overnight sleeper from the North East, to attend a 10 am Interview with a company in The Strand.  I was ushered into the presence of three rather academic looking gentlemen who fired all kinds of technical questions at me, none of which I could answer. Finally one of them said  ” If you cannot understand basic economics, Mr Gray, then this interview is over.”  When I revealed that my name was not Gray but May, they  pilloried the unfortunate secretary who had mixed up the files and despatched me to  the floor below. I finally got the right interview but did not get the job. I did, however, get my travelling expenses refunded!

Just after my fifty -fifth birthday, I got the chance to go into private practice with a ex-colleague but soon realised  it was a big mistake.  I  became bored stiff dealing with self employed characters whose books were just carrier bags full of receipts, pub landlords who noted down their takings and cash expenditure on the backs of calendars and dodgy contractors who wanted two sets of accounts – one for them and the other, ”doctored’,’ for the taxman!   I said thanks but no thanks and went for an interview (via the grapevine)  to the local council offices where I was treated like a has-been.

A pompous young clerical officer looked at my CV and made some snide comment about the number of posts I had held. He then smirked and said it was in his brief to contact previous employers as well as  check my qualifications if he felt it necessary!  When I did not react, he indicated that I might as well take a test to judge my computer competence and spreadsheet skills.  He stood over me tut-tutting and then finally made a patronising remark about ” having to interview applicants of your era who just seem to want somewhere to park themselves until  their retirement.”   Somehow, I resisted the temptation to inflict GBH  on the little squirt and was therefore able to leave with my dignity intact.

The nicest interview I ever had was with a local company, which was part of an American  multi-national corporation.  I was welcomed by an attractive, efficient Receptionist and escorted  to the office of the Managing Director, who turned out to be lovely gentleman who played golf.  We had coffee and, after dispensing with the formalities, spent some time talking about our respective careers and golf handicaps. We got on like the proverbial house on fire!  ( There was none of those infantile questions such as “and where do you see yourself five years time” or ”what are your strengths and weaknesses”.)  He then showed me round and explained the set up and I was impressed at  how well mannered and friendly everyone was.   Back in his office we settled into a couple of easy chairs, had some more coffee and a smoke, whilst he outlined the reporting procedures and accounting routines that were required by the Parent Company. I was also shown a set of  Accounting Manuals which had to be followed to the letter.  ”Reckon you could cope with all this, bearing in mind the yanks might accept one cock up but not two”?

I did wonder if this fate had befallen my predecessor, but then I heard myself confidently say that I WAS SURE I COULD COPE  and, when I received a letter offering me the position of Financial Controller, I jumped at the chance.  It was the start of six of the happiest and most satisfying years of my career.  I can still recall how my boss would pop his head round the office door just before 5pm (summer weather permitting) and say ” You OK for nine holes?”  Of course this also meant several ales in the clubhouse, but I rarely refused.  I, and the whole staff, were devastated when he was diagnosed with terminal cancer. The way in which he coped with it, and how it affected our close working relationship, deserves a chapter all to itself.  I would like to do that someday!

The worst interview experience I ever had was at a company in aeronautics. The office and premises were within an active civil airfield and I arrived to find the Reception Desk untidy and unmanned, phones ringing, static coming from the tannoy system and people just coming in and out of various doors. Eventually a harassed female appeared and just said  ‘Well?”   When I stated why I was there she just shrugged, barged into  the nearest door and yelled ” Tony,  are you expecting another bloke for that job?”.   The answer was muffled but the female indicated that I was to be granted an audience. ”Tony”, was on the phone and pointed to the only chair in the room. When he finally finished, he got up, opened the window and yelled out to someone something about f******  time sheets.  He then sat down and rummaged through some papers. The phone rang and he spent quite some time arguing with ”Ted” about  spare parts.  No sooner had he put the phone down than a man in overalls  just walked into the office and enquired what should be done about the late fuel delivery.  Another argument developed as to who’s responsibility it was, whilst I sat there in astonished disbelief.  Needless to say the interview was nonexistent as “Tony” could not find my CV or application letter. He then had the gall to say he had to leave because he was  late for some sort of meeting or other!

In years to come I always held up this experience as HOW NOT TO DO IT when arranging or being part of an interviewing panel.