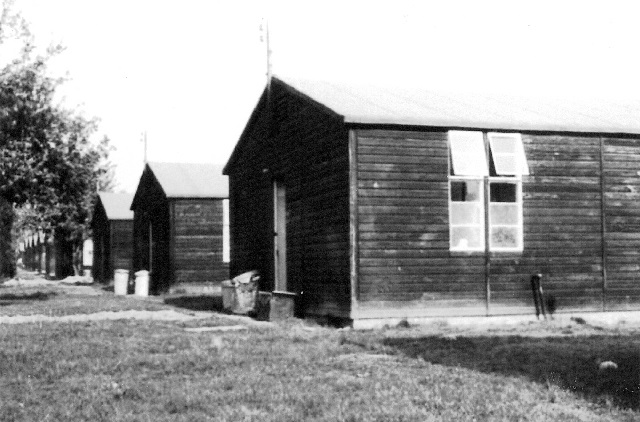 In 1953 saw the first of the Administrative Apprentice Training School’s moves to RAF Hereford and this ‘tour of duty’ lasted until 1959 (and again briefly between 1962 and 1963) when the School was next relocated to RAF Bircham Newton in the wilds of Norfolk . 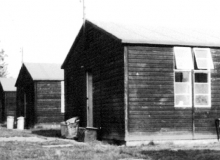 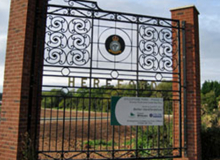 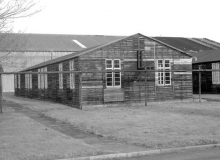 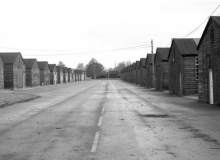 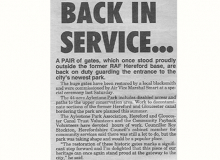 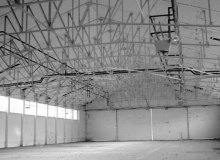 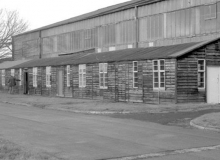 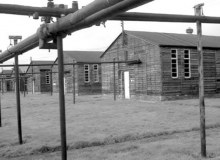 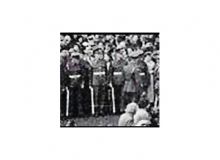 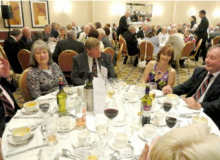 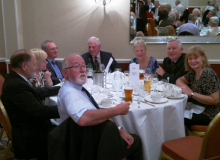 Royal Air Force Hereford was opened in June 1940 by the formation of No. 11 School of Technical Training, which remained there until 1947 and was joined from 1942 to 1946 by the School of Torpedo Maintenance. Although never an operational flying station, it was responsible for training the airmen who were to keep the aircraft in the air, providing airframe and engine fitters for Bomber Command’s Halifaxes and Lancasters and for Fighter Commands Hurricanes and Spitfires. It also provided torpedo experts for the torpedo bombers of Coastal Command. R.A.F. Hereford therefore made a major contribution to the war effort. At the same time, other units on the Station, notably No. I Aircrew Officers’ School (1944-47) and the R.A.F. School of Administration and Accounting (1944-1948), also played an important role. After World War II, the Station was mainly concerned with the training of officers, airmen and airwomen for administrative duties. Some of the units that contributed to this end left. These were the Secretarial Branch Training School, No. I General Service Training School, the Advanced Training School, No. 6 School of Recruit Training, the N.C.O. Training School, the Administrative Apprentice Training School and No. 2 School of Administrative Trades, which came into existence at Hereford in May, 1947, and over the years provided the Royal Air Force with very large numbers of highly trained clerks, shorthand-writers and typists. They returned here in 1964 from Kirton in Lindsey in the form of an Adult Supply and Secretarial Squadron.

Administrative Apprentice Entries 21-35 were trained (or started training) at Hereford. Entries 32-35 relocated to Bircham Newton in January 1959 where they completed their training. Entries numbered 44 to 46 moved back to Hereford and eventually graduated there – passed out in mixed flights of BEs and Apps together which was odd. In 1956 the station had been hit by the first ever attack of Asian Flu’ and many, if not most, Admin apprentices training there at the time were affected. The Station Sick Quarters located opposite the main entrance was filled to overflowing and empty huts behind the then guardroom were hastily made ready for the expected flow of infected hordes. I well remember these huts that were linked together by a central corridor which seemed to stretch away for ever and was eerily spooky when one left one’s bed to venture alone to the toilet during the night! I well remember keeping everything crossed until daybreak rather than take that trip!

Talking of spooks and such like, RAF Hereford reportedly had its own ghost within the sick quarters itself and rumour had it that nurses at one time refused to work in one particular ward because it was said to be haunted. It is now 50 years since Iand other apprentices of my era were holded up in station sick quarters but something really strange happened one night. Memories of what really happened in this particular case have blurred with the passing of time. However,my recollection was that an apprentice reported for admission in the dead of night and was seen by at least one inmate who noticed the urbiquitous bedpack over his shoulder. . The next morning there was no sign of him and it later turned out that he had diedat home many miles away. Eerily enough, the apprentice who said he saw the ‘spook’ was himself the victim of tragedysome years later when he disappeared one night on a ferry crossing from Kowloon to Hong Kong. He has never been seen again.

In September 1958, the R.A.F. School of Catering moved from Halton to its new and permanent home at Hereford where, in its imposing building and with its very modern equipment, it undertook for the whole of the Royal Air Force, the training of officers, airmen and airwomen in the catering trades. On 23 April 1959, Royal Air Force Hereford was granted the Freedom of the City of Hereford marked by a parade in the city centre. On 23 April 1994, the Station exercised its right of freedom of entry for the last time before the unit was handed over to the Army. The ceremony took the form of a parade by personnel of RAF Hereford accompanied by representatives of the Queens’s Colour Squadron and the Western Band of the Royal Air Force. The Station marched through the city with ’ swords drawn, bayonets fixed, colours flying, drums beating and bands playing. This must have been very reminiscent of the day in 1957 that Her Majesty The Queen and Prince Philip visited the city when my own entry alongside the others training at the time, proudly took part in a large parade in the city to mark the occasion. A plaque commemorating that day can still be seen outside city hall.

Sadly, the Station finally closed it’s doors to RAF training in 1999 when it was taken over by the Army. It now houses 22nd Regiment SAS. It will be remembered fondly nevertheless, by generations of apprentices and other RAF personnel both those trained there and not forgetting the trainers themselves. It was once the proud boast of RAF Hereford that wherever an RAF Unit was formed, there must be a man trained in the classrooms of Hereford.
Do You Have Any Photos Taken During Your Time At RAF Hereford? If So We Would Be Pleased To Hear From You
administrator@rafadappassn.org

← Previous Unit
We use cookies on our website to give you the most relevant experience by remembering your preferences and repeat visits. By clicking “Accept All”, you consent to the use of ALL the cookies. However, you may visit "Cookie Settings" to provide a controlled consent. Read More.
Reject All Cookie SettingsAccept All
Manage consent