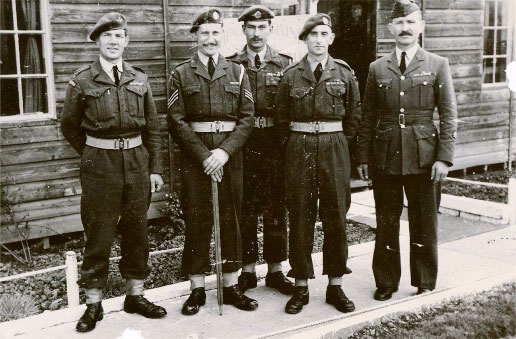 Where would we have been without those delightful characters who taught us, chased us around and generally made men out of boys? The permanent staff members who served at the various AATS training units were probably the most important people to influence us during our training. Some were hated, some were cartoon characters but most did a damn good job.

This page is dedicated to them. We must all have memories of those we came into contact with and some are certainly alive and kicking and probably still known to some of you. If you have any information whether historical or up to date, then do let us have it. For further advice contact administrator@rafadappassn.org 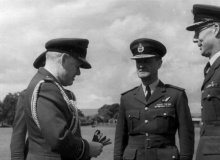 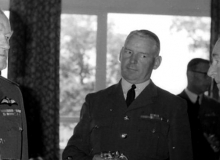 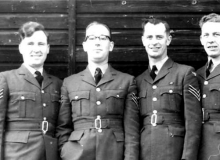 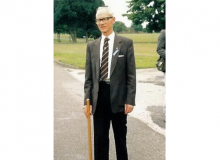 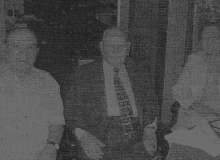 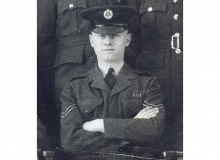 The following information giving details of permanent staff at RAF Bircham Newton between 1959 – 1961 was kindly provided by Ron Muggleton 38th Entry In August 2007
The Chief Instructor in the Supply Trade was Flt Lt Godfrey.

The following were Supply Trade Instructors at RAF Bircham Newton sometime between September 1959 and March 1961:

I last spoke to him when I took him to a 38th Entry re-union, I think near Huntingdon some few years ago. Last seen on a dining train on the preserved Great Central Railway celebrating his 80th birthday with his family. I was with my father, also ex RAF, who was the same age as Pat so he would have been born around 1921. I was told only recently that Pat is still alive and living at South Kilworth but I cannot confirm this.

1) Sgt Prior (Wally to we brats). I was told, again very recently, that Wally Prior is still with us and living in Kent.
2) Corporal Wallington
3) Corporal Jimmy Stewart
4) Corporal McGillivray
5) Corporal Target

There was also a Sergeant Mahoney who I believe was an ex Admin Apprentice. (Clerk Sec?)

The School Warrant Officer was Master Pilot Kijak – I think he was Polish and a pilot in WWII.

The Bandmaster was Sergeant Bloomfield

The GDT Section was commanded by Flight Lieutenant Keeling and Instructors were Sergeant Slater and Sgt Fisher assisted by Corporal Ruff. 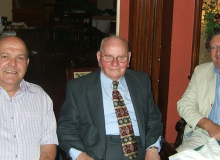 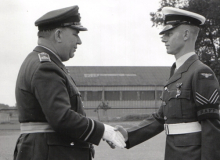 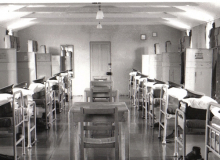 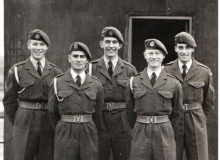 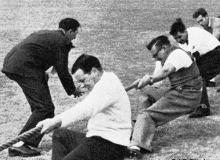 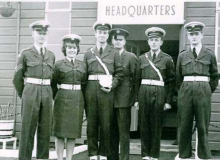 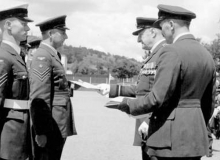 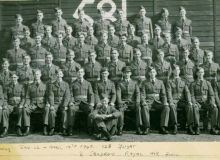 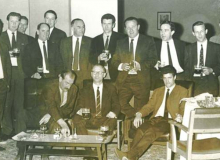 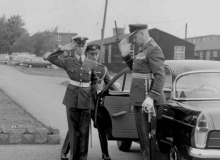 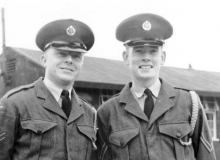 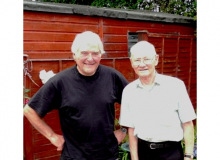 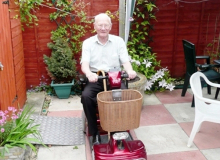 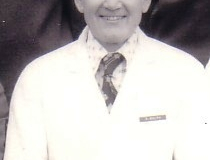 2nd October 2008 – From John Summers Clk Sec Instructor 1958-1961
I had the privilege and pleasure of being a Clk Sec Trade Instructor (Shorthand/Typing) at AATS Hereford the Bircham Newton from Apr 1958 to Apr 1961 or thereabouts. My particular flocks were 33rd, 34th 35th (half) and 38th (half).There were many of us at that time probably specially recoursed for further training because we were not up to snuff.Names that spring to mind – Secretarial: Jumbo James; Brian Mahoney; Denis Gibson Accts: Roy Shingler; Jimmy Alan Supply: Scotty Irvine (dec) Steve Deacon (dec).
Below: Courtesy Of Roy Higgins – 8th Entry Clk Sec Instructor
St Athan 1952
I joined AATS, St. Athan in September, 1949 as a Clerk Sec and passed out as a Junior Technician in May, 1951. Then on to RAF Hemswell and became a local curiosiity with the upside down stripe! After a year I was posted to St. Athan as a potential instructor – the Chief Clerk at Hemswell was disgusted with the new assignment, not because of my talents but rather the difficulty of getting replacements – we had a rather difficult farewell, especially as I had also been annointed as a runner for his betting franchise!

I arrived at St. Athan as a Cpl. and immediately met the Clerk GD instructors, which included those who had instructed me and remembered all my weaknesses – however, since I was then 18 years of age I had changed them for more challenging and satisfying character flaws. They were all Sgts. and F.Ss.and as I remember a couple also had wings – many were awaiting demob but were all helpful and encouraging. My first assignment was attending a 2 week course at the School of Technique, Organisation and Method and again my very junior rank and age made me somewhat of an outsider. Bit I managed to get an acceptable grade and was appointed as a Shorthand/Typing instructor. Unfortunately I don’t remember many of my fellow instructors, but the did include: FS Dick, FS O’Christie, FS Davies, Sgt. Freddie Joyce. My tour included the transfer of AATS from St. Athan to Hereford where my last class was the 17th Entry.

After that I had two tours on the RAF Staff in Washington, DC and in between a tour at 90 Group/Signals Command. I left the RAF at the end of my 12 years and remained in the States since that time. Bill Huggins introduced me to the Association some years ago and happily I took his advice and became a member.

As a postscript – I believe I was the first post-war admin apprentice to serve as an instructor.

The following are believed to have served as Permanent Staff at RAF Bircham Newton at the time 311 Entry was under training: 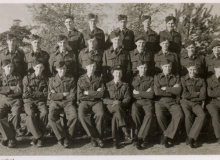 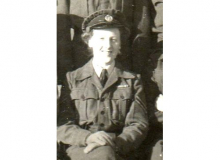 These Images Featuring Flt Lt I Vaughan Who Was An Eduction Officer At RAF St Athan Between 1948-1954. A Keen Rugby Player, Flight Lieutenant Vaughan Was Also Involved In The Training Of Admin Apprentices. Photos Courtesy Of Mr Rob Evans Grandson Of Flt Lt Vaughan 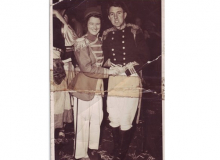 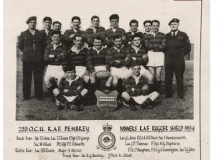 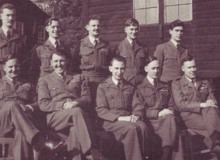 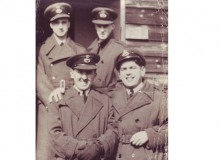 H. C. Fry – One time Supply Instructor RAF Hereford
The Operations Record Book of No. 1 R.A.F. Beach Squadron records that the Landing Section of 101 Beach Flight, consisting of a Landing Officer and eight men,touched down at H plus 210 minutes on Queen Red beach on D-Day 6th June 1944. Acting Flight Sergeant H. C. Fry was one of those eight men. The record states that,“The Landing Section under F/Lt G. McBride RAAF was fully occupied in assisting to restore order on the beaches and assisting the Army Beach Companies in clearing the beaches. F/Lt G. McBride and No. 644472 A/F/Sgt Fry H.C. being examples to all.” F/Lt McBride was subsequently Mentioned in Despatches and it seems that H C Fry received the Croix de Guerre. Charles James (22nd Entry) has been in touch and he recalls, “I joined the RAF in 1954 as an RAF Admin Apprentice (Supply). My instructor was a Sergeant Fry. He had been awarded the “Croix de Guerre” in WW2. He was quite a character and highly thought of in RAF Supply Circles. Last time I was with him was at RAF Hereford in 1956 when he was a Chief / Technician. Last I heard of him I believe he was a W/O at St Athan.” 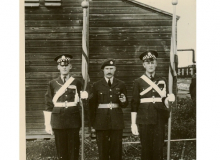 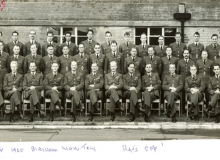 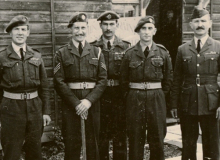 It pleases me to write to you all ,sorry I wasn’t able to attend the annual bash I’m sure it would have been the thrill of a life time, and so many memories could have been shared ,of which since corresponding with most of you many have been brought to light through the cobweb years when E.Mailing me thank you all .At present aged now 79yrs I find the legs aren’t able to do what they did when I was chasing you lot around on and off the parade ground ,I often wonder how many of you would go through it again ,I know as hard it was at Cardington 1948, I would do it again ,be honest how many of you would ,come on let me know it’s a good talking point .
Bringing us all together, unknown, complete strangers ,and something we would never have had ,had we all stayed as civilians, the service as far as I’m concerned made us including me ,being just as green behind the ears made Men out of boys ,during all those years we had a wide and varied lives to live some more successful than others but I don’t honestly think any of us begrudged those who did succeed higher. In fact those of you who did achieve their goal, whom I learned of years later, didn’t surprise me but gave me a sense of pride in playing a minute part of that
success . I myself got as far as I ever would do ,maybe who knows had I stayed in a bit longer ?. Any of you who would like to share your past with me I’m sure some of you could have some interest experiences of life in the R.A.F. ,after meeting each other Please E.Mail or write to me . REG (R.S.K)
Memories Of FS ‘Chiefy’ Davis by WHM (Brad) Bradley 10th Entry

Having read the Permanent Staff Page I was disappointed that there was nothing about Flt Sgt ‘Chiefy Davis, RAF Regt as he was
then. He ruled with a rod of iron but us ‘brats’ reveered him. We were ‘his boys’ and woe betide anyone outside of the AATS who
tried to discipline us. He was strict but fair and even his German Shepherd dog stood to attention in front of him when he came
onto the parade ground uninvited.

There are many stories about him. For instance, when he was orderly sgt he always tapped his pace stick on the corridor wall
when approaching our billets to wake us up in the morning. If you didn’t have both feet on the floor when he entered, you got the
sharp end of his tongue.

About three years after we had ‘passed out’, Phil Martin, was now a Sgt newly arrived at Ismalia in the Canal Zone, On his first
morning, for no accountable reason, he found himself out of bed and getting dressed. Then, he heard a voice from the direction of
the parade ground. He looked out of his tent and there was Chiefy, now Warrant Officer Davis, drilling the RAF Regiment. Such
was the power of the remembered voice! Phil told me this story about a year later when we met up in Cyprus.

There are two photos at the bottom of the permanent staff page which need amending. One is of Colin Stevens and myself with
Sgt Fisher. We were 10th Entry Standard Bearers for the 9th’s passing out parade. The other photo was taken outside the AATS
Squadron Offices at St Athan and not Bircham Newton. Jumbo James must have had an aberration when titling this photo of
which I also have a copy. Also, The Warrant Officer on the right of the photo was Bill Shakesby and not Jim Sowerby.
Unfortunately, neither can I remember the names of the two unnamed staff.

← Previous Unit
We use cookies on our website to give you the most relevant experience by remembering your preferences and repeat visits. By clicking “Accept All”, you consent to the use of ALL the cookies. However, you may visit "Cookie Settings" to provide a controlled consent. Read More.
Reject All Cookie SettingsAccept All
Manage consent