The FORTY THIRD Entry was attested at the Administrative Apprentice Training School RAF Bircham Newton on 2 May 1961 where training was undertaken in the trades of Pay Accounting, Clerk Secretarial and Supply until 18 December 1962 and was the last Entry to pass out from RAF Bircham Newton. 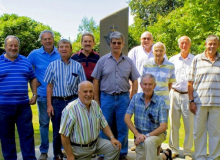 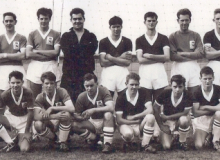 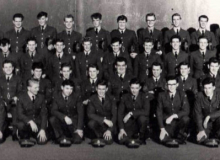 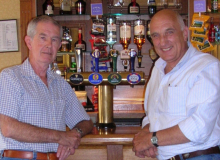 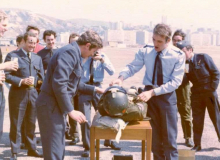 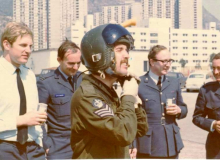 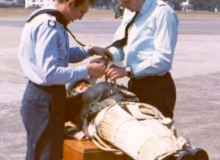 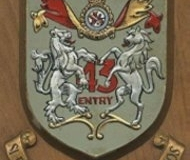 We signed up together on the 2nd May, 1961 and it was very soon apparent that Rod’s sense of humour and optimism would all be needed in the coming months. He could be labelled the class comedian but there was a lot more to Rod than that. It was more often bending the rules rather than breaking them. How to evade Wednesday sports afternoon. We’d met a couple of shop assistants in Hunstanton who had Wednesday afternoons off. The solution was to take up cycling, put on a tracksuit and cycle about a mile or so to meet them at a local farmhouse. How to evade the morning parade. Rod put it to me that if I got confirmed (by the Bishop of Thetford) I could join him in taking communion and spend thirty minutes every morning having breakfast – only interrupted by loud shouting from the parade square!

The most famous anecdote was in our last term. As we were the last entry to pass-out from Bircham the numbers of Apps was dwindling, so Griffin house was closed and we moved back to our initial accommodation in Zeebrugge Block. Our DI, Cpl Turner, was standing at the foot of the stairs (giving us a hard time no doubt) and Rod was having a fag half way up the stairs. Temptation got the better of him and the DI’s beret became his ashtray. Rod left the RAF in 1974 and began working in insurance/mortgages in England but eventually returned to Scotland. Whilst at Bircham Rod was an enthusiastic participant in the Station’s radio broadcasting. In Inverness he did part-time work with a broadcasting franchise and he became a full-time Sales Manager and broadcaster. He opened Radio Border, spending ten happy years there, before becoming Managing Director in 1997 of Radio Northsounds in Aberdeen. In 2005 the company was taken over and the management team was replaced. Until final retirement he worked for a recruiting firm in Aberdeen writing CVs for those wishing to join the oil industry. I last met Rod in 2010 and – dare I say it – he hadn’t changed his outlook on life one bit. He died on the 15th December, 2014 after a two year struggle with lung cancer. Particularly poignant as Rod gave up smoking 45 years ago! In true Rod style, his wife Anne informs me, he lived life to the full with holidays and fun times with family and friends.Rick Short (43rd)

Have You Any Photographs Or Other Memories Of the 43rd Entry RAF Administrative Apprentices? If So You Can E-Mail Them To:
administrator@rafadappassn.org