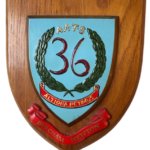 The THIRTY SIXTH Entry was attested at the Administrative Apprentice Training School RAF Bircham Newton in January 1959.Training was undertaken there in the trades of Pay Accounting, Clerk Secretarial and Supply until 28 July 1960. 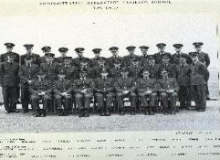 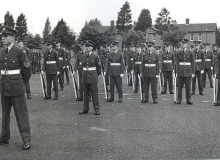 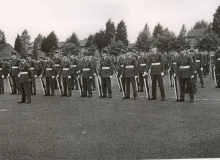 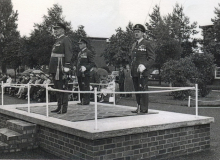 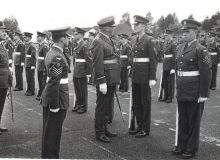 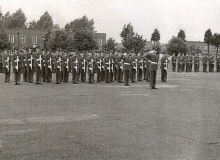 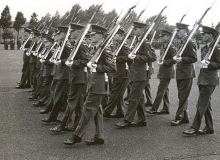 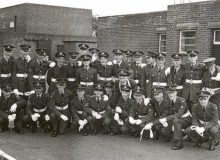 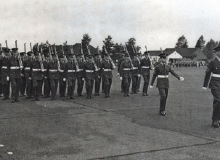 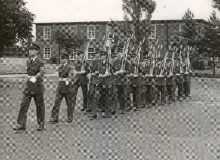 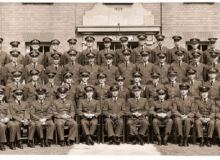 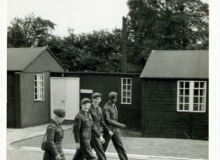 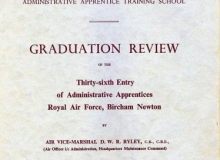 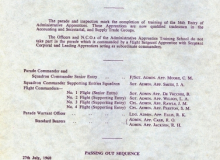 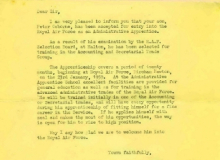 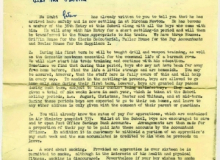 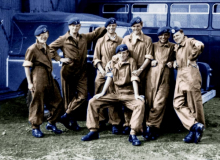 I first met Peter in early January 1959, on a very cold and windy railway platform in Kings Lynn whilst waiting for a connecting train to Heacham where we were to be met by Corporal Jimmie Stewart and transferred to the AATS at RAF Bircham Newton. During that first meeting, whilst enjoying a sneaky cigarette, we discovered that we shared the same birthday and that he was two hours older than me. Thereafter, we exchanged birthday cards each year until we lost touch.

Peter’s time at Bircham was fairly uneventful although he did attract a little bit of notoriety and admiration, bordering on, “hero worship” for having been able to walk from Kings Lynn to Bircham in less than five hours in the middle of the night, having missed the last Bus back to Camp. He was also enthusiastic on the football field and achieved fame in the ranks, for having fallen down a rabbit warren and breaking a leg – such was his stature.

There was a good précis of him in our Passing Out edition of the Apprentice Magazine which read “One whose stature and ANGELIC appearance so clearly belied his ability to cause Instructors to lose hair at an unnatural rate” It was perhaps a little after the rabbit warren episode that he became an ardent and faithful fan of the greatest football Club in the World, Manchester United and followed them for the rest of his life.

Having done “his time”, at home and abroad (notably GAN) Peter left the Royal Air Force in January 1972 and acquired a Newsagents shop in London which he managed for a couple of years. It was during that time that he began to use his accounting skills and started doing a few accounting jobs in his spare time, mainly for a Company named Adscene which was a free newspaper that was distributed throughout Kent (his home County).

Soon afterwards, having attracted a number of other clients who were mainly self employed businessmen, he established his own accountancy practice, trading as Peto Accountancy Services in Canterbury.

It was not too long before the size of his Practice caused him to look for a Partner and he merged his business with one of the larger Firms in Canterbury, namely,
Larkins Chartered Accountants.

Shortly afterwards, in 1996, he joined a Property Company, trading as Halsion in Canterbury as Financial Controller. The staff there remember him as a little bit scary as he did not mince his words and he ordered a special extractor fan to be installed in his office as he would not give up the smoking habit. In fact, one member of staff cannot ever remember seeing him without a cigarette on the go.

Peter was also a public spirited man and in 1991 was elected as a Magistrate and served on the Bench until he was forcibly retired at the age of 70 in 2012. I shall always remember visiting him in Canterbury a few years ago when he was Chairman of the Bench and being impressed by the number of people who would greet him in the street as “Mr Osborne, Sir” only to discover that he had sentenced them to time at Her Majesty’s Pleasure or had admonished them. Such was the man.

“We met up again at Bircham for our 50th anniversary in 2009 and a group of us, including Peter, were fortunate to have been able to have had regular reunions ever since in addition to the annual Admin Apprentice Association’s reunions.

I was privileged to attend Peter’s “celebration of life” service at the Crematorium on 4th April and was a little surprised at the large turn out – almost like a Manchester United Football crowd. The humanitarian service was conducted by Ted Fisher, a member of the RAFA and Peter was marched in to the tune of the “Dam busters March” played by the RAF Central Band and after all the eulogies he was marched out to the famous Manchester United Red Army chant of “Glory,
Glory Man United”, and I assume they won the Premier League as a tribute to Pete!!

Brian’s formative years began, like so many of us, with his journey to Bircham Newton on 22 January 1959 to join the 36th Entry as an Apprentice Pay Accountant.

He soon rose to the rank of Sergeant Apprentice which is testimony to his ability and the high standards he set himself and encouraged others to do the same. On completion of training Brian passed out as a Jnr Tech Pay Accountant and awarded the Air Ministry Education Prize for highest marks in Education subjects, which didn’t say much about the rest of us!

His first posting was to the Accounts Flight at RAF Marham and on promotion to Cpl Tech he was posted to High Wycombe. In September 1965 he was posted to Masirah for a 12 month tour and on his return he was posted to Wattisham pending selection for commissioning. Brian went to OCTU and was commissioned as a Flying Officer on 23 Jun 67 followed by a posting as the Cashier at Leconfield. In October 1969 he was promoted to Flight Lieutenant and posted to Changi as OC Accts Flt. It was whilst at Changi that Brian began to dabble in the stock market and decided he could do better for himself doing this rather than a career in the RAF. He asked to resign his commission, however, he was made to serve a period of 5 years from date of commissioning to “amortise” the cost of his training.

Brian returned from Changi in Jul 71 with a posting to Innsworth to complete his 5 year period, finally leaving the RAF on 23 Jun 72.

Initially, Brian worked in Norwich working for Norwich Union specialising in large scale insurance brokerage before moving to Anthony Gibbs Merchant Bank in Leeds followed by a move to Ashworth Sons & Barrett in Manchester as a broker working on the stock market. He moved to Brown Shipley Stock Broking Ltd where he became a Director Feb 87 – Aug 90. At the same time as he was at Brown Shipley he also set up his own stock broking company, Paxsted Financial Services, in Jul 75 until retiring in November 1991.

Brian put down his success to the bromide in the tea at Bircham – it worked for quite a few of us. He regularly attended our AGM and 36th Entry reunions. His idea of breakfast was taking fresh air outside the hotel entrance wherever we stayed; he also won the prize for being fined the most by hotels for smoking in his room!

Whenever we went into the bar Brian would always ask for single whisky and at the last minute say “make it a double”.

Brian and I did not meet from leaving Bircham until 45 years later. His first words to me were “do you still clean the welts on your shoes”. I had never heard of welts on shoes until going to Bircham so I was very pleased to report to Brian that yes, I still clean the welts on my shoes, not only that but I have the original shoes brushes issued at Bircham and the one for cleaning welts was made by Remploy Ltd in 1958 – stores reference 22B/45! In addition to myself, three other members of the 36th Entry attended his cremation, Keith Rossiter, Leslie Porter and Steve Maden together with some 90 guests which is testimony to Brian’s popularity. He leaves behind a wife, 3 sons, 1 daughter and 3 grand children.
R.I.P. Brian.

Have You Any Photographs Or Other Memories Of the 36th Entry RAF Administrative Apprentices? If So You Can E-Mail Them To:
administrator@rafadappassn.org