The THREE HUNDRED AND TWENTY FOURTH Entry was attested on 8 September 1971. Training in the trades of Clerk Secretarial and Supplier and Cook was undertaken at RAF Hereford: The Entry passed out on 16 August 1972. 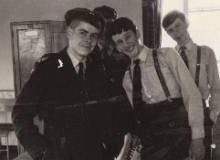 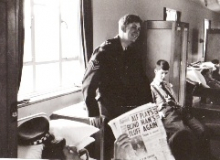 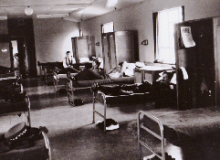 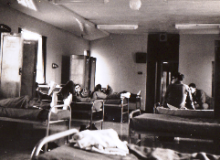 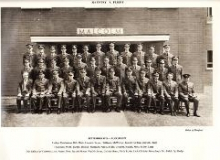 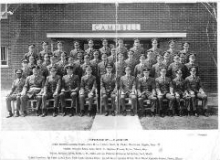 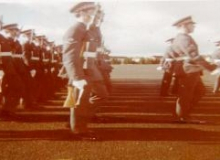 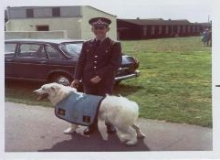 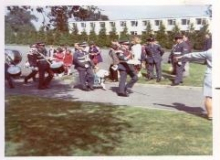 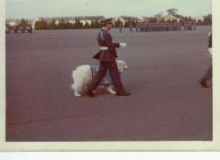 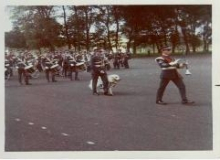 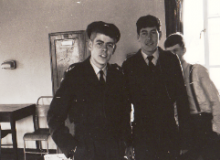 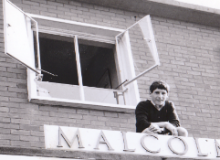 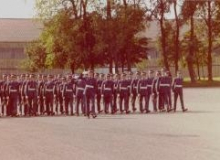 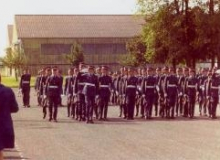 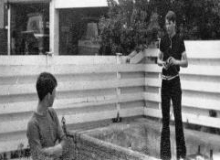 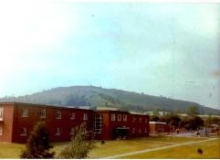 Having passed the 11 Plus and then subsequently thrown away my education I saw a RAF apprenticeship as a way to salvage something. So I did the initial IQ tests at Reading CIO and found my way to the RAF Youth Selection centre at RAF Stafford in very early ‘71. For me, like many others, it was my first real taste of the military and I remember a scary Corporal telling us to book back in when we came back in the evening. I can’t remember what I did that evening (I was only a baby faced just-turned-15 year old after all!) but I do remember the said Corporal coming round late at night banging on the doors and screaming loudly at the people who had not booked back in.

I was too young to go to Hereford as part of 322 Entry so it was on 7 September 1971 that I made my way from Reading to Hereford to join up at the tender age of 15 ½ years. We did our attestation on the 8th September and that was it, we were in, part of 324 Entry C Flight.

Gibson Block was our new home and no doubt like those before us, we excitedly chattered into the small hours, trying to work out what we would be doing and just too excited to sleep. My abiding memory from that first day was that we had a lad from Northern Ireland with us named Day. When we woke up the next morning he had gone – Day by name and day by duration.

So our Leading Apprentice, Neil Walker of 320 Entry, and our block Cpl AA John Keenan set to getting us genned up with the “traditions”. We learnt that 324 and 320 Entries were “sister” entries and 322 Entry were referred to as something else. After one term, we would become “XXXX” entry and 320 Entry would not be around to help us.

So we learnt to bull boots, shoes, floors, blanco webbing belts and polish everything. Our Gibson Block staff were Sgt Gordon Cross and Cpl Jerry Smith (both RAF Regt) our Flight Commander was Flt Lt Al Munro who if I remember correctly was a former Red Arrows Pilot. OC Admin Wing was Wg Cdr CC Bevan who was a good guy and loved his rugby (so I was well in). Over on the other Apprentice blocks they had such renowned staff as Sgt “Sticky” Smith (C Flight) who had a red nose that would have pushed Rudolf for sheer luminosity, Sgt Dave Russell (E Flight) who when on Orderly Sgt would insist on coming round waking all apprentices up while bawling out “C’mon, c’mon get out of bed” and finally the legend that is Sgt Eddie Rudge (or Eddie “Bah!”) as he was known, over on A flight with Cpl Tich Friend who despite his smaller stature was very wide – and not to be messed with.

Sometime around 73 when I was at RAF Colerne we got a whisper from the clerks at that Sgt Eddie Rudge was detached to Colerne for six months. Our worst fears were realised when one day he shouted across the road at myself, Neil Walker and Pete De Gol (324 E Flight), “Walker, Lanning and De Gol, I know you herberts don’t I?” … “yes sarge,” we wearily replied. I think Eddie had a hard time adjusting from a training camp to a busy engineering camp and while his bike was not lobbed into the Emergency Water Supply tank as a much as legend at Hereford records, he did depart Colerne quietly without a whisper (or a Bah!)

We also had to learn to be drilled. I hated it because I was bad at it. I found it boring and did not concentrate so when the first term Drill Competition came up we in 324 C Flight decided that we less able ones must sacrifice ourselves so that we put the best team out and beat the other two flights. We mainly decided that we would karate chop the exterior walls of Gibson Block until our hands swelled up. We had a very tall guy called Stan Stephens and he was so tall and his stride so long that he had a hard time learning to march so he let a few guys kick his shins. While the Station Medical Centre was trying to work out why lots of Gibson Block apprentices suddenly sustained ailments that rendered them unable to drill, we won the drill cup easily. I think at that point we learnt that we were one and that we all had to pull together.

Some didn’t though and found things not too their liking. A number left by their own decision, a number were released back into civvy street because of bad behaviour, bad exam results and because they could not keep up standards. I guess that by today’s culture a lot of the stuff we did would be viewed very seriously, cold baths for people whose hygiene fell below standard, bed tipping for the junior and “XXXX” entries (yawn) and general stick from 322 Entry but in a strange way it did cause us to bond together. As Ian Baldie (322 Entry) mentioned in his excellent article, a few people took it too far while we were at Hereford and were sent to MCTC Colchester as a result.

Sport was great and I was able to play for the Apprentice Wing at Rugby and later on in the year I represented the Apprentice Wing at athletics and Hereford won the First Year Apprentice Championships beating the first year apprentices of Cosford and Halton. I ended up as the First Year Discus winner and Mick Landsown (also 324 Entry C Flight) won the 100 metres. One of the lads from A flight also won the Hammer (well, we were being coached by the Commonwealth Games silver medallist Flt Lt Bruce Fraser).

My first Hereford Society club was Judo but I switched to HBS the apprentice radio station (I say radio but it was in fact piped through the Tannoy system) where somewhat strangely I did both the Reggae and Progressive Rock shows. They were good days and I remember playing both Hendrix and Harry J All Stars, The Wailers and Wishbone Ash. Songs that take me back to that era include, Family – In My Own Time, Argent – Hold Your Head Up, Rod Stewart – Maggie May, The Stones – Brown Sugar, America – Horse With No Name, and many more. By that time Glam Rock was coming in, which I detested and still do, so it was great to be able to bang out some decent music.

Confession time, a few of us at HBS decided to get a 36 hours pass (basically Saturday night out) get a few drinks in (we were all well under age) and spend the night in at HBS (in the School of Catering building) having a party. Well into the evening we discovered that we’d got loads of booze but no food. We were starving and as we couldn’t be seen around camp, we managed to squeeze through a few windows in the School of Catering and found a food store and basically thieved a load of carrots and ate them. If you are a longstanding fan of Billy Connolly you may know what is coming next, suffice to say that lots of Bulmers Cider and lots of carrots affected our young digestive systems negatively and as a result, parts of the School of Catering were pebble dashed with a carrot and cider mix. We had to apologise to the cleaning ladies for the mess but fair play to them, they did not turn us in. I have never drunk cider again since that night (over 40 years ago).

Another piece of fun to be had working at HBS was making your way back late in the evening from the School of Catering and seeing other apprentices, sliding down the WRAF Block drainpipes in a bid to get back to their own blocks before bedcheck at 2200. We’d usually wait until the miscreants were around 10 feet from the ground and yell “OI!” as loud as we could. The resulting leap to the ground and the ensuing 200 yards sprint back to their own blocks were rare feats of Olympian prowess. If you were one of those unfortunates to be caught out by us, I do apologise for the distress and extra laundry caused.

By some fluke I passed out from training qualified SAC Supplier General with a Distinguished Pass. Trouble was I was only 16 ½ years when I passed out so I had to retain the rank of Admin Apprentice for six months, then LAC for six months before I could put up all three props as SAC after a year. On my eighteenth birthday I got a load of back pay which I blew on a motorbike (Honda 250cc) and a trip to Canada. My first posting was RAF Colerne near Bath where I met up again with Neil Williams (320 Entry), Mick Diett (322 Entry) Steve Taylor (322 Entry) and Pete De Gol (324 E Flight).

It’s now forty years from those days and having PVR’d in 91 and studied at Theological College for the Christian Ministry I find myself, after leading a few churches, as a Prison Chaplain. It’s a great job that I’ve been doing since 2005 and with just a few parallels to being a RAF Apprentice (the food, can’t go anywhere and having to obey orders, etc.). If things had gone another way I could well have been inside as I was going off the rails as a youth.

While I don’t miss the bull, the drill and the awful Saturday evening discos (with the usual local female faces every week – they just changed partners from time to time) I am conscious of a debt of gratitude for the change that being an Apprentice wrought in me.

Have You Any Photographs Or Other Memories Of The 324th Entry RAF Administrative Apprentices? If So You CanE-Mail Them To:
administrator@rafadappassn.org