The THREE HUNDRED AND EIGHTEENTH Entry was attested on 7 May 1970. Training in the trades of Clerk Secretarial and Supplier was undertaken at RAF Hereford: The Entry passed out on 30 April 1971. 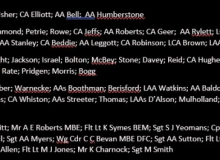 Having defeated the R.A.F. Locking Apps. 23 – 0 (away) R.A.F. Hereford Apps. played R.A.F. Halton Apps. (home) on Sat., 27th March ’71.On a hot afternoon more suited to cricket than rugby football the final of the tnter-Schoots Rugby Competition got under way. Hereford started in great form and Forster was particularly unlucky in being bundled into touch with about five yards to go. Halton counter-attacked and scored a very good try, most of. their pack having handled the ball en route, A further try to Halton soon followed making the score 0 – 6.Hereford’s chance to score soon followed when a penalty was awarded some 30 yards out following a scrum infringement by Halton. Moore was, however, unsuccessfui with his kick. Another penalty was awarded to Hereford soon after, and the value of team training was proved with a tap penalty followed by a scissors movement reaping dividends, with Watk ins drawing the cover to the blind side of the field. Meanwhile Amor put in a powerful, diagonal run to score a very good try about six yards in from touch. At half-time the score was Hereford 3 Halton 6.Despite being out·weighed in the pack Hereford managed to contain a lively Hallon team who had now had their tails up and were pressing hard. There followed a series of loose mauls Which culminated tn,the big Halton lock forcing his way over for a disputed try, the Hereford defenders claiming ,that the ball had not been grounded. The referee, S9t. Pow ell R.A.F. Abingdon, disagreed however. The score was now 9 – 3 to Halton. Hereford continued to fight back however, and were unlucky to be further behind following a lucky bounce which enabled Halton to score again. The kick failed and we were now 12 – 3 down. Herefordshowed their excellent team spirit during the next stage of play, refusing to give up and fighting every inch of the way. Amor, Wales, Watkins, Segust and Padgett were performing prodigies on tackling back and covering all over the field. Hereford then sustained a crushing blow when they lost Kitching the hooker, with an ankle injury with about 15 minutes of play to run. Despite this set-back Hereford continued to chase every ball, and strove to gain another score. Their efforts finally paid off. Following a line-out Segust, who had been creating havoc at the end of the line with some very shrewd breaks, managed to collect a loose ball which he sent out to Watkins who drew his man well before sending the ball on to Barber. With a clever dummy Barber drew his man and passed to Amor who then came inside his man and scored a beautiful try under the posts. Watkins converted this try and the score was now 8 – 12 to Halton. Excitement mounted with the numerous spectators, many from Halton, willing their team to efforts. There was to be no more scoring however and a clean well· fought final came to a close. 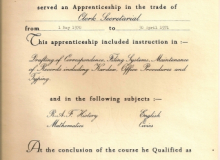 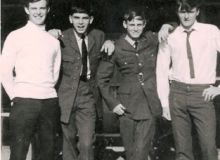 Thanks to Bill Dalson for providing us with a few memories of his time at Hereford including the magazine from 1971, the App Band, him with Snowy &  and with Taff Barber (with the berry on). Bill says he has no idea why they were  posing outside Nicholson block as they were billeted in Malcolm Block. 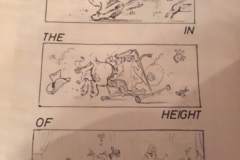 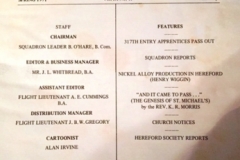 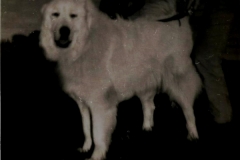 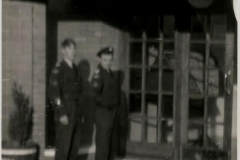 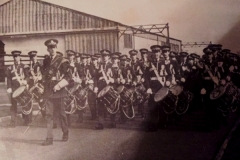 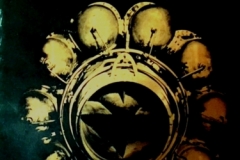 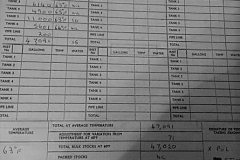 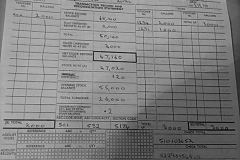 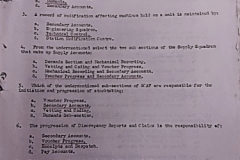 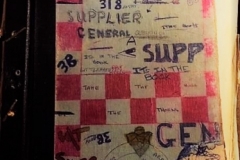 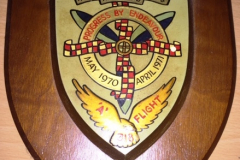 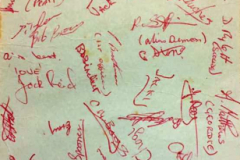 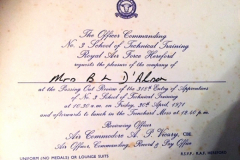 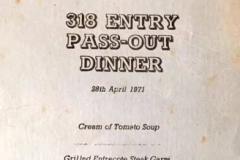 My thanks to Steve Day for again picking up images placed on our Administrative Apprentices Facebook Group. These images attributed to Bill Dalson (the last 4 in the gallery above), would have been lost pretty quickly on Facebook but are now preserved permanently here on your entry scrapbook page. Anyone reading this including you Bill, I would much appreciate a copy of any future posts placed on Facebook that directly relate to this or any other AATS entry.

Have You Any Photographs Or Other Memories Of the 318th Entry RAF Administrative Apprentices? If So You Can Mail Them To :
administrator@rafadappassn.org