The TWENTY FIRST Entry was attested at the Administrative Apprentice Training School RAF Hereford in January 1954. Training was undertaken there in the trades of Clerk Secretarial, Pay Accounting and Supply until 28 July 1955 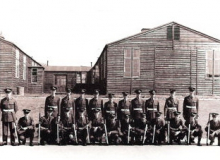 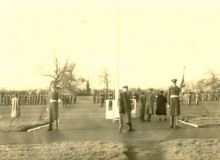 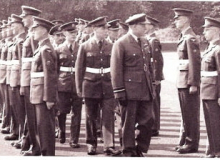 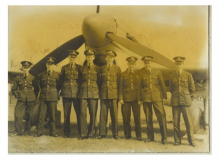 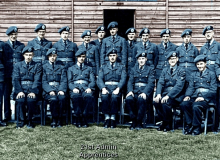 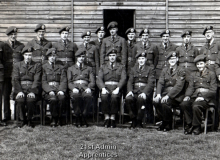 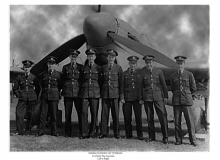 We have been notified by Helen Goucher (David’s daughter) that he passed away in his Dorset home in the last week of October. From our regular emails we knew that David was suffering health problems which he fought with great determination, good humour and, as Helen said, the occasional G&T. David came from a Derbyshire mining family. His father worked at Creswell Colliery where in September 1950 David’s uncle was tragically killed with 79 others in the Creswell Colliery disaster.

David’s brother, Michael, preceded him to AATS when in September 1953 he joined the 20th as a Supplier, the last Apprentice Entry to enlist at St Athan. David joined the 21st Entry as a Clk Sec in January 1954 by which time the School had relocated to the Trenchard Lines at RAF Hereford. The 21st Passed Out in July 1955.  David was an extremely popular member of the 21st; likeable, friendly, ambitious with a good sense of humour he was well respected by his peers and the School staff. He soon revealed that he possessed good leadership qualities and he thoroughly deserved his eventual promotion to C/A/A. His personal qualities together with his very high sense of duty were recognised at the end of training when he was selected for a Cadetship at the RAF College Cranwell. He successfully completed his Cadetship and was appointed to a Commission in the Secretarial Branch. He went on to have a very rewarding career annd achieved Group Captain rank before retiring.

During our periodical emails over the past few years including the essential Sick Parade reports(!), reminiscences and reflections on our Apprentice experiences, and BREXIT, three comments of David are of interest. Attending the 21st Pass Out Parade was one of his father’s proudest occasions. As his career progressed so did the value of his Apprentice training. He would have like to have returned to Hereford as Station Commander but settled for RAF Uxbridge where he no doubt ensured that the Queen’s Colour Squadron’s drill standards maintained those of the 21st Entry!

David will be sadly missed by all those who knew him.

The Death Of Haydn Illingworth

Following Haydn’s passing in August 2018 I will be placing all obituaries here on the 21st Entry Scrapbook Page:

As a fellow 21st Entry member, I was very saddened to learn of Haydn Illingworth’s passing. Our paths didn’t cross after we left Hereford but we met at one of the early annual reunions. Over the last few years we exchanged several emails during which we tried to put the world to rights. However, we didn’t agree on Brexit and on that subject we came from different angles. I knew he had some health problems and for the past few months he didn’t acknowledge my emails.
The passage of years since we passed out in July 1955 has dimmed the memory of our time together at Hereford. But I recall that Haydn was known as ‘Babe’ because of his baby-looking face. Also, in those days, we were issued with boots without toecaps. Haydn’s feet were so big that there were no toecapless boots to fit him so he was the only one in our Entry who wore boots with toecaps. I remember him as a friendly, likeable and jovial individual who fitted in to the company very well. RIP Haydn.

I first met Haydn around 2002 when he was one of four ex-AA’s meeting in Watford to form what the late Trevor Moore (15th) dubbed the SW Herts detached Flight.  Haydn rarely missed a meeting as the Flight expanded to draw members from most of the Home counties and beyond to our now regular home in the Three Crowns, Bushey Heath, Herts.

Haydn was born in Shipley, West Yorkshire but the family had moved to Brighton for his schooling by the end of the war.  As with most of us in those more austere days the wider world offered by the RAF had great appeal, so he joined the 21st entry as a Clk Sec in 1954 which was the first entry to do all its training at Credenhill.   He was a keen sportsman, playing football and captained the AATS cricket team (that usefully included a couple of RCyAF apprentices) to victory over the Army Apprentices at Chepstow.  He left an account of what at least in retrospect seems to have been a happy time for him, including mastery of the Barlock typewriter and the arcana of personnel administration.  Posted to Tangmere, at the time a front-line Fighter Command station, he told how his keenness led to his neglecting to circulate correspondence before efficiently filing it!  He was rudely plucked from Sussex by the Suez crisis of 1956 and sent with the two Hunter squadrons (Nos 1 and 34) of Tangmere wing to Akrotiri for five months.  After this a posting to the Weapons Testing Establishment at Woomera, Australia arriving after 9 days of a lumbering voyage in a Hastings.

Haydn’s 12 year adult RAF service was completed at HQFC Bentley Priory where he met and married Barbara who had worked there for another ex-AA, and one of our Herts members, John Forshaw (17th) in P2 branch.  He took a position at Thorn-EMI in administration and then moved to Three Rivers (Rickmansworth, Herts) District Council as payroll and finance manager.  It was at his funeral that we discovered another aspect of his life, he had been Grand Master of the Order of Oddfellows lodge in Watford.  I also remember his mention of an interest in the Clear English Campaign and that he enjoyed writing and left several autobiographical accounts of service life.

You could always have an interesting chat with Haydn who was a loyal and lively attender of our reunions until his last appearance in August 2016.  He had also been a keen Volunteer Curator and guide at the Bentley Priory museum, and in 2013 organised and led us in a visit there which was memorable and an enjoyable occasion.

Haydn died suddenly on 24th July 2018 of prostate cancer as he was about to be discharged from hospital after admission for pain management.  Four members of our Association attended the funeral on a sunny September afternoon.  As I walked back to my car afterwards I caught up with a lady who had been there and asked her of her connection.  She replied, “I worked for him at the District Council, he was wonderful and would always fight for people’s rights and made sure they got what they were entitled to, he was firm but fair”.  I thought that was such a good summary for a life.

Have You Any Photographs Or Other Memories Of the 21st Entry RAF Administrative Apprentices? If So You Can E-Mail Them To: administrator@rafadappassn.org