The EIGHTEENTH Entry was attested at the Administrative Apprentice Training School RAF St Athan in January 1953.Training was undertaken in the trades of Clerk Secretarial, Pay Accounting and Supply at RAF St Athan and RAF Hereford until 26 August 1954. 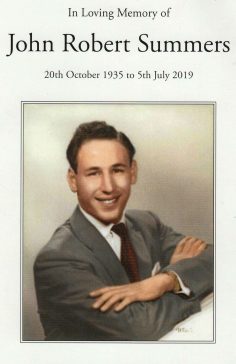 The funeral service of John Summers was held on Thursday 15th July during a heatwave at Eltham Crematorium, with a post service gathering at a family member’s home, also in Eltham.

The coffin entered to the strains of Elgar’s “Nimrod” with our exit music being ‘Out-of-the-Blue’ the theme music from BBC radio’s long running “Sports Report – with this version played by a Royal Air Force band!

John was just 4 during the early stages of Word War II, hence became an evacuee.   From an early age he was keen on planes but colourblindness ended hopes of an aircrew career.  Neverthess he enlisted in the Royal Air Force as an Administrative Apprentice.  One presumes colourblindness didn’t dent his ability to fiddle with small coloured pieces of plastic in those old rusty Kardex trays!

Throughout his life John was a committed Christian who knelt by his bed in barrack rooms to pray with regularity.  He was very keen on cricket and rugby but detested football.   He served in the Royal Air Force for 25 years leaving in 1978 as a Squadron Leader.   The call of the drum took him to Paris, but his but his “plum” posting was working in the office of our Air Attache in Washington – the highlight of his military career.   On returning to “Civvy Street” John headed to Saudi Arabia, becoming an Office Manager for a prominent Sheikh.    On return to Blightly he ran that Sheikh’s London office, working well into his ’70s.

John was a passionate lover and owner of dogs, particularly alsatians.  He was also a true gentleman who often wore a hat and always doffed it when approaching ladies – whether he knew them or not.  His sort are very much a dying breed!

John’s wife had sadly died 5 years’ ago and he had lost a daughter who’d been a cancer sufferer.  He had borne such advertsities with fortitude.   His last years weren’t happy ones as his health deteriorated due to the onset of dementia, with his final 3 years being spent in a home, where he was well looked after and cared for.  Only in August his nephew (one of 2 eulogists at his funeral service) brought him along to attend a meeting of the South West Herts Branch of our Association.

Thirteen attended his funeral service and were able to say a farewll to a remarkable man.  Your Royal Air Force Adminstrative Apprentices’ Association were represented.

I never knew John, although our servce carreers overlapped, our paths never crossed.   The words used were taken from 2 eulogies spoken at his funeral service.  DA 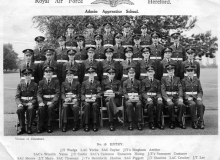 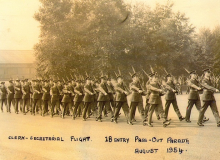 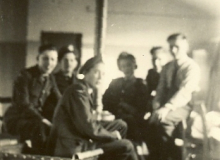 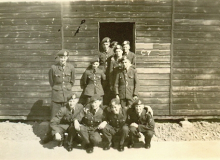 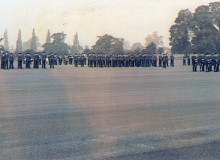 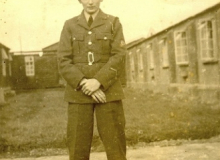 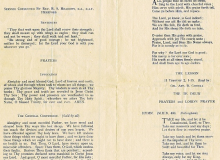 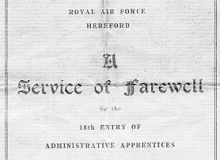 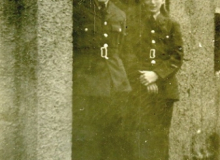 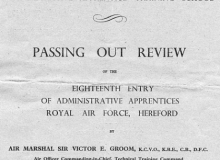 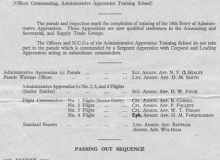 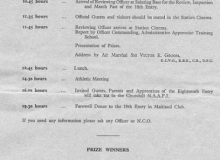 I have received the following from Paul Woof, the son of the late Warrant Officer George Woof -18th Entry. Please note that Paul would be glad to hear from anyone who remembers his father so if you do, then please contact Paul via the email adress listed below.

George Woof who was a member of this site and joined the admin apprentice school in 1953 has sadly passed away on the 07/04/2016. My Father enjoyed His RAF career immensely and served at many stations both in the UK and Overseas , Myself being born in 1960 at Barry whilst my father was serving at St Athan . My father retired from the RAF in 1977 as a Warrant Officer and started a second career ( outside the wire ) as a credit controller for an agricultural company in Carlisl .  George retired from Rickerby Ltd in 1995 to look after his wife (my mother) as she was ill . My mother passed away in 1998 and George found new employment driving as a volenteer working for the ambulance service, taking patients too and from hospital,  a job he enjoyed as
he was driving and talking to people doing something useful . Unfortunately George had to stop his hospital work aged 78 through ill health and after  suffering a bravely borne illness died aged 80.
I think My father would have done OK even if hed not joined the RAF.  However I think the discipline and the training he would have got as an apprentice will have most surely been first class.

To summarise, my father was always helpful to anyone whoever they may be and would always give good advice as to whatever their situation was . He was a proud man and very loving towards my mother and myself . If anyone here knew George Woof  I would be happy to chat to them and I can tell some very funny stories as to when we were at Changi in Singapore 1966-1969

Best regards to all,
Paul Woof

Whilst searing through the British Newspaper 8

Website I came across this Article from the Portsmouth Evening News from August 1954.

Sadly we lost Nigel in 2004. But I hope those of us from the 18th have good memories of him.

Top in the Best Entry. Eighteen tear old Sergeant Administrative Apprentice N. V. O. Healey, youngest son o) Mrs. F. E. Healey and the late Mr. Healey, of 3S, Adair Road, Southsea, was honoured at the RAF. Station, Hereford, yesterday. /Is School Captain, he took the passing-out parade of the 170 apprentices of the eighteenth entry at the Administrative Apprentices’ Training School, who collectively obtained the best results of any entry in the school’s history. Sgt. Healey was placed first in order of merit among the apprentices, and obtained the highest education marks of the entry. He will be posted to Odiham (Hampshire!. The parade was reviewed by Air Marshal Sir Victor Groom (Air Officer Commanding-in-Chief. Technical Training Command, R.A.F.) who presented the prizes.

Have You Any Photographs Or Other Memories Of the 18th Entry RAF Administrative Apprentices? If So You Can E-Mail Them To:
administrator@rafadappassn.org