The TENTH Entry was attested at the Administrative Apprentice Training School RAF St Athan in May 1950 and training was undertaken in the trades of Clerk Secretarial, Pay Accounting and Supply until January 1952. 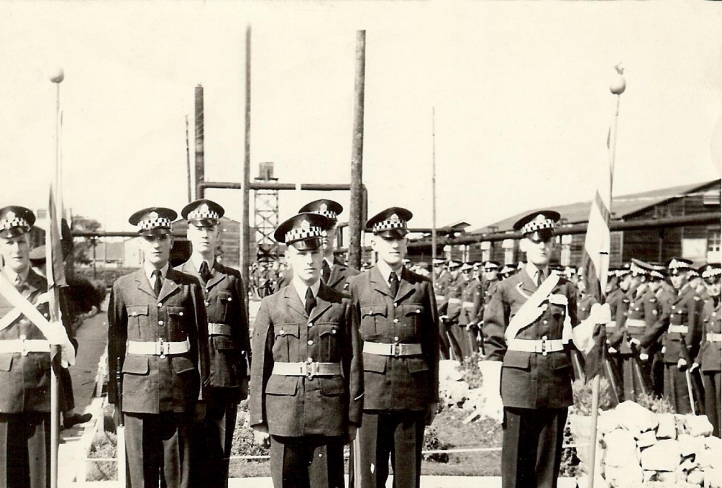 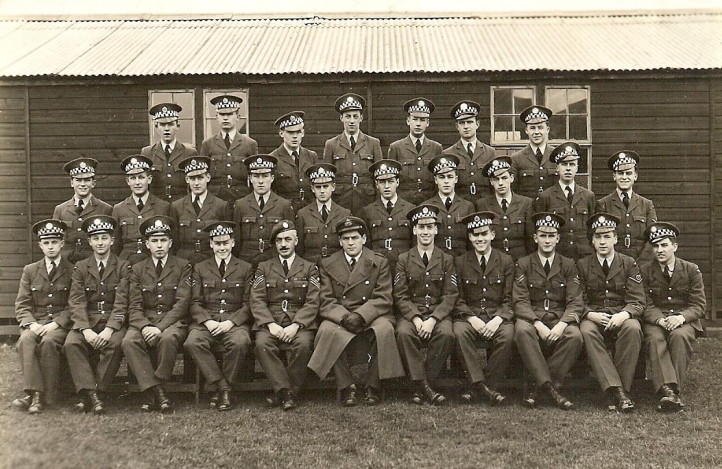 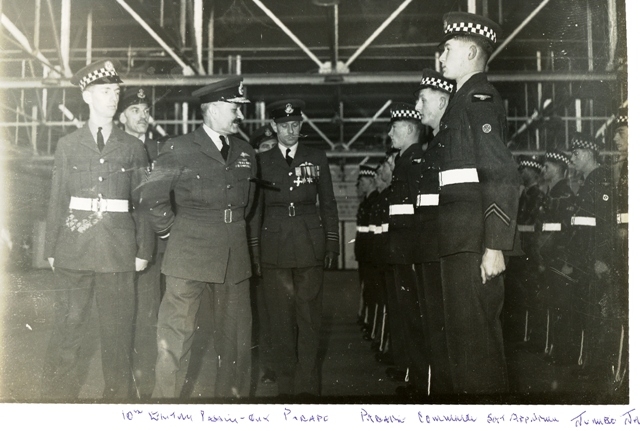 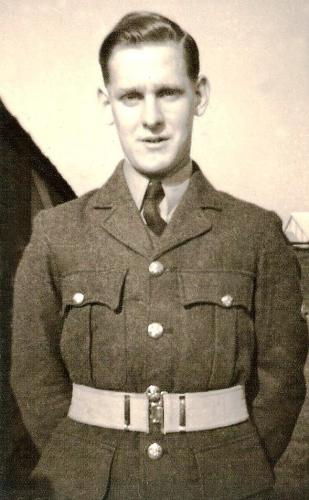 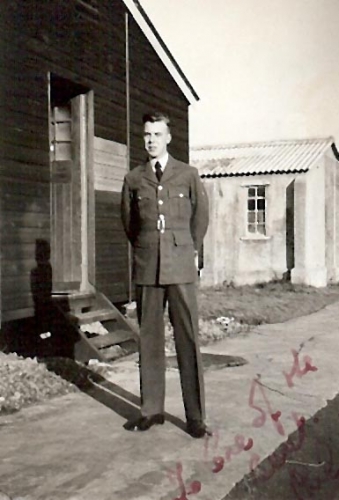 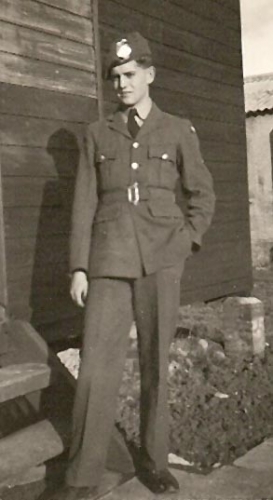 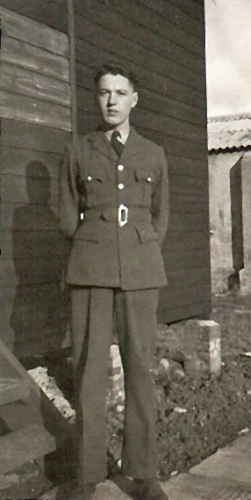 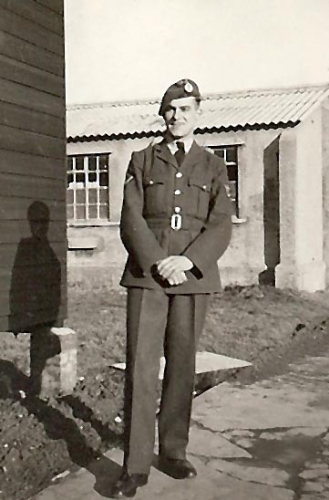 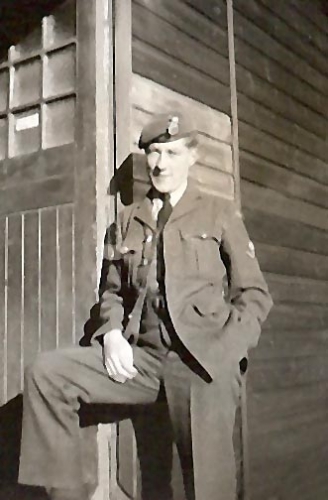 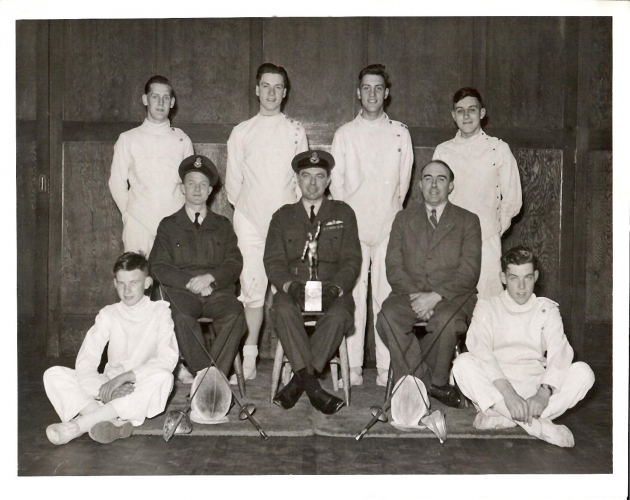 It was originally presented by AVM McKewen for presentation to the winning team in an annual enter-apprentice school fencing competition to be fought in foil, epee and sabre.  I think, at the time, there were three schools competing: Halton, Cosford and St Athan.  We were the first AATS team to win the trophy.  Those in the photo were: back row L to R; Myself, ‘Del’ White, Brian Knott and ‘Du’ Duval.  Seated O i/c Fencing (can’t remember name) Wg Cdr Pollard CO AATS, Mr Harry Birch (Fencing Master);  Front sitting:  Bill Poynton and ? Cooke.  At some stage the McKewan Trophy was lost but around 1975 it was found  at the back of a display case at RAF Halton.  The apprentice schools had closed by this time and so the RAF Fencing Union approached AVM McKewan’s widow, Lady McKewan, for permission to re-allocate the trophy.  She agreed and the RAF Inter-Unit 1-Hit Epee Competition was introduced.  I am happy to say that I captained the RAF High Wycombe team who were the first winners and also had the pleasure of receiving the trophy (for a second time), this time from Lady McKewan (in her 90’s) who came for the latter stage of the competition. 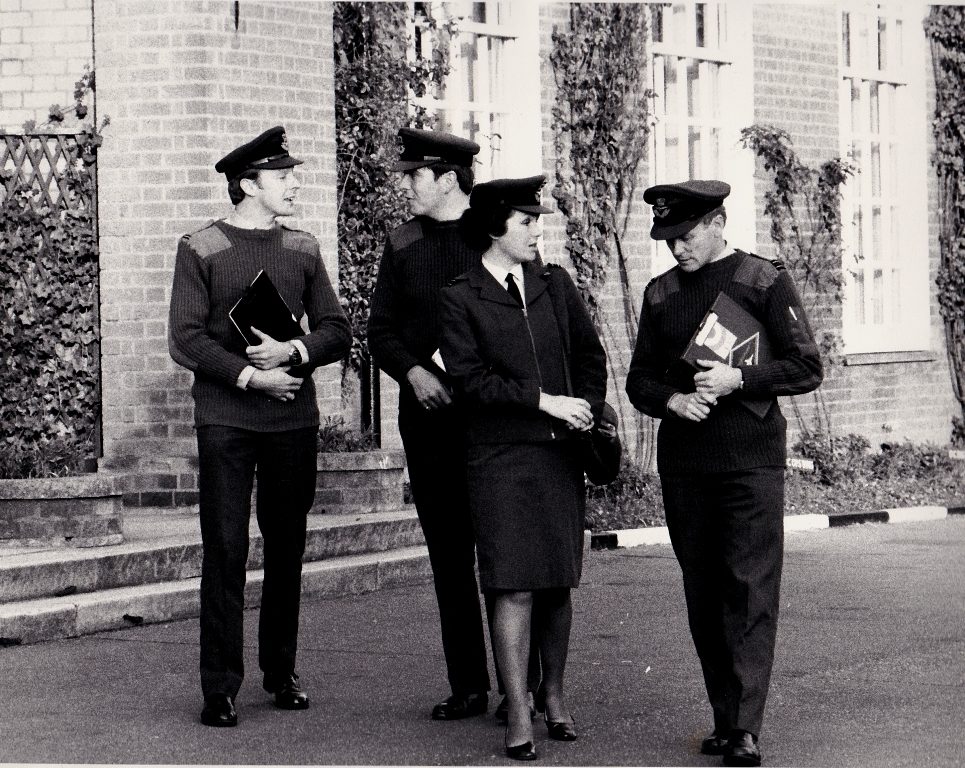 Some of you here have known my father only briefly – others are family members or friends of long standing. Whichever you are I wanted to tell you more about the often larger than life personality that was my father.

It is important to me to talk about my mother at the same time as they shared decades of life and partnership together – one of the reasons I felt it appropriate that they both appear on the Order of Service today.

Born David Antony Valentine Browning, my father was one of three brothers living in Kingsteignton, Devon where my mother’s parents ran the local village shop.

My parents first met at the age of six when they sat next to each other at school. Their paths separated at the age of eleven when they went to the boys and girls grammar schools.

The schools provided a shared dancing class, though my father always told me that he wasn’t a good enough dancer to be mum’s partner and he had to resort to various means to oust his best friend from that position.

They started courting at fifteen but when my father announced he was joining the RAF my mother declared there was no future in it and they split up.

Fortunately for me she changed her mind and during one of his home leaves they became engaged – (the picture on the reverse of the Order of Service).

My father was serving in Khartoum on the banks of the Nile and returned just two days before their wedding on the 12th December 1953. I often think of the leap of faith they made – making their vows after such a long period of separation – joined only by their frequent letters.

Small, dark and quiet my mother was the perfect foil for my dad’s blond liveliness and their marriage lasted over sixty years.

My father served in many countries including Denmark, Africa, France, Aden (now Yemen), the Ascension Islands, Malta and Cyprus. For some of them my mother and I were lucky enough to travel alongside him. As a little girl I had instilled in me the need to “knock out my boots” in case a desert spider or scorpion with a back full of babies had taken up overnight residence and to this day I am wary of rock pools because of moray eels or some other sinister sea creature that might take off my hand.

During his Service life my parents had many opportunities to enjoy an active social life and as well as attending numerous balls and parties, they became enthusiastic members of various drama clubs – where they both acted, sang and in my father’s case produced.

He was also a presenter on service radio while we were overseas.

Many Service personnel do not “mingle with the locals” and one of the things that made my parents special was their ability to make and retain friends of all nationalities often enabling us as a family to take part in a range of celebrations and opportunities that not everyone was able to access – providing a fascinating insight into other cultures and customs. My Father was innately chivalrous and would often go the extra mile to help anybody or anything he thought was being unfairly treated – there were times this brought him into conflict with senior officers but this never seemed to bother him – though it may have delayed several promotions.

My father was a keen sportsman and represented the Air Force overseas in both boxing and race walking – an ungainly looking sport that manages to cover the ground at over seven miles an hour. He was also a Boy Scout leader, ran a rifle club and was involved in a host of other activities.

One of his favourite posts was Public Relations Officer at RAF Coltishall – this gave him lots of opportunities to exercise his considerable charm and the chance to appear on the Basil Brush television show and Radio 1.

A rather less than successful publicity event however, was when the air sea rescue helicopter was deployed to replace part of the flagpole on Nelson’s church in time for Trafalgar Day. Sadly the helicopter knocked down the rest of the flagpole and my father had to explain on BBC News at 10 what had happened. (The flagpole was finally replaced by a Navy helicopter – good news for the church but not so good for the RAF who would have endured much ribbing as part of inter-service rivalry).

He did voluntary work for SSAFA, (a services charity), where he would fight the causes for veterans and their families. He also worked with teenagers and young adults to improve their computer skills and help them write CVs and apply for jobs. He was President of the local Stamp Club and a long standing member of the Dereham Society which provided a range of culture and art activities – including quizzes. My dad was a brilliant quiz master – enthusiastic and interrogatory – our son Jonny once wrote in a school essay that sharing the breakfast table with Grandad felt like taking part in a never ending game show – with a taste of danger – answering questions whilst being faced by a herd of stampeding wildebeest – (I read this comment out to dad who thought it hilarious).

My mum was very pleased he found all these activities to get involved with as during his first week of retirement she had come home from work to a brightly coloured rockery (found some spare paint and thought it would smarten it up a bit!) – being a diplomatic soul she said nothing (though I recall her face said it all) and while my dad was out we decided to resolve the issue by turning the rocks over. Unfortunately this wasn’t successful as with true military efficiency he had painted every single part of them – bright shocking pink!

My Father was a restless spirit – with his shock of blond hair and air of sprinting forward to the next challenge. Even in later years he thought nothing of walking the dogs 10 miles a day and leaping on his racing bike to nip down to town. He was good with animals and children – kindly but brisk – showing the same sense of wonder and interest that small children have in the world about them – he collected everything. He had a strong sense of the ridiculous and often played pranks – but laughed at himself as much as others. When I was a little girl I thought the sunshine came out when my Father came home and the house filled with his singing and whistling.

I hope that I have been able to capture for you some of my Father’s cheerful and vibrant personality – we will all miss him.

Have You Any Photographs Or Other Memories Of the 10th Entry RAF Administrative Apprentices? If So You Can E-Mail Them To:
administrator@rafadappassn.org