The Ghost of Credenhill-Peter Culley (29th) 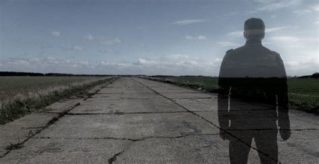 Extract from:-
THE TELFORD JOURNAL
24 November 2032

The Journal’s recent series of articles based on our readers’ experiences of the paranormal (‘Supernatural Sightings’) has thrown up several interesting examples of psychic hauntings – both local and national – and led to considerable speculation as to their possible explanations. Some have been the subject of much publicity to the point that they are now well known and form part of our national history.
One lesser-known example however has just been brought to our attention and we include it here as it may well resonate with some of our older readers. We have called it:-
THE GHOST OF CREDENHILL
Some initial background is essential to put the following events in their proper context. Credenhill is located not far from the city of Hereford and back in the 1950s was the home of an RAF Station having – among several units – one entitled the Administrative Apprentice Training School. Actually AATS was something of an enigma itself, being an experimental concept designed by the Service to fulfill more of a social than military role. Its prime purpose was to engage with many young hooligans who had already suffered a brush with the law in the hope that they might be diverted from a life of crime and – eventually – mature into respectable members of society. There is even some evidence to show that certain Apprentices had actually faced the choice when coming up before a Magistrate in the Juvenile Courts of either joining the RAF or going straight to jail (without collecting £200)!
To return to our tale of the superntural. The first instance of paranormal activity at Credenhill occured during the winter of 1956/57. Winters in Herefordshire could be severe and Apprentices were housed in flimsy wooden huts not noted for their insulation. Death by frostbite was ameliorated however by the presence of pot-bellied stoves in each hut. These were banked up at lights out and glowed throughout the hours of darkness. On the night in question an Apprentice woke to see a hooded figure seated close to the stove even while the remainder of the hut’s inhabitants slumbered peacefully. Not recognizing the intruder the lad challenged the apparition whereupon the stranger rose without a word and quickly walked through the nearest wall of the hut out into the freezing night.
The Apprentice in question wasted no time in reporting what he had seen to the relevant authorities. Sadly his notoriety backfired on him and he only narrowly escaped being brought up on a charge of involuntary hallucination brought on from sniffing the fumes from the tin of Brasso used while polishing the buttins on his greatcoat!
In spite of this inauspicious debut, reported sightings of a ‘spectral stranger’ continued to be claimed by various people on the Station, and he was – accordingly – acknowledged by the award of a name – Charlie. This was followed by intense speculation as to his origins. There appeared to be two schools of thought on this topic. The most prevalent was that he was in fact a deceased member of the 29th Entry who had been lost without trace during a D of E expedition on the Brecon Beacons. As improbable as this may seem, retired members of the Entry recall these expeditions with misgivings, remembering map-reading fiascos; wading through fast-flowing streams; coping with ever-changing weather while engaged in the desperate race to get back to our farmhouse base first in order to bag a bale of hay for a bed that night. They are of the opinion that losing the odd Apprentice would not have been so unusual. Thesecond theory believed Charlie was an early disillusioned Apprentice of the Entry who bought his discharge only to be consumed with remorse to the point where he sought to rejoin his companions by any means whatsoever. You pays your money and takes your pick.
As mentioned Charlie continued to make frequent appearances duing that time. A National Serviceman reported him wandering the corridors of SSQ at night, no doubt in search of a nurse or even a bed pan. The NAAFI Manageress claimed to have seen him sitting forlornly on his own and nursing a Coke but she was notoriously sentimental where Apprentices were concerned and her evidence was discounted. It was suggested that he occasionally appeared when Apprentices were drilling in the Parade Square, but none of the regular DI’s confirmed this. One of our readers (A/A Culley of the 29th) made passing reference to Charlie in his Memoirs (published just before his demise). It seems he was obliged to march from Trenchard Lines to the Station Guardroom in full kit to participate in a form of punishment known as Jankers. As he marched through the camp he became aware of a stranger (also in full kit) accompanying him. At first he thought it was one of his friends (A/A Croucher or Trumbell perhaps) before dismissing this thought as preposterous. He attempted to engage his silent companion in small talk but to no avail. Following the inspection at the Guardroom the silent stranger disappeared.
The final appearance of Charlie came on the day the 29th Entry graduated from Credenhill in 1958. Following the inspection by the Reviewing Officer the Entry slow-marched through the ranks of the remaining Apprentices. Luckily the eagle-eyed father of one of the Apprentices in this ritual was surprised to count 31 Apprentices taking part instead of the 30 listed in the day’s programme. Of course in the middle of such pageantry it was impossible to identiy the extra man, and predictably he disappeared without trace.
And so passed Charlie into the realms of Service folklore. He never spoke a word and was never seen again after that day. I am left with just two unanswered questions, did he pass out as a Jnr Tech? and to which Station was he subsequently posted?