Some Hereford Recollections by Peter Hall

Here are some recollections that might generate some interest in 29th to 34th entries: 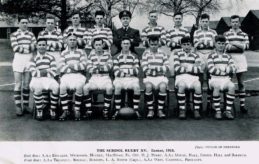 The other day, I was looking through some old photos and came across one entitled ‘RAF Hereford, Rugby Football XV Easter 1958’.
Gazing back at me in the back row, third from the right, was a callow 17 year old captioned ‘PM Hall’. As a member of the 33rd Entry, I was new to the team and in awe of the established stars. As well as Tom Edwards, Ray Burrow and Mike Wilkinson, there was our elusive scrum half Harry Trumbell and speedy back Ken Baldock. Also looking back at me were two faces that brought a smile to my face: Dave Huckle and Johnny Campbell. Huckle and I joined together and were only beds apart in Hut 171. Huckle, Hall and Paul Watson shared many an hour in the tin room cleaning greasy pans after falling foul of Cpl  ‘Frigg’ Smith or our beloved Sgt Jackson. Dave Huckle was old for his years and his dogged resistance to authority was probably the reason he left the Entry after about 6 months. I would love to know of his whereabouts if anyone knows. Johnny Campbell was a charismatic leader of men, universally liked. Shortly after our move to Bircham Newton, he suggested that it would be a good idea if we raided one of the messes across the square from our block, requisition a piano, and place it next to the guardroom as a gate guard. Four of us thought this to be a sensible idea, and although there were plenty of Suppliers about, we failed to apply sufficient logistics or resources to the enterprise. On a foggy evening we prised open the large sash window on the ground floor, rolled the piano to the window but failed to cope with the awkward shape and weight of the trophy.  In sum, the piano fell several feet onto the pathway, and one leg fell off as we crossed the square. I think it was a unanimous decision to ‘run for it’. Johnny had a lambretta type scooter that he secreted locally. We regularly headed for the fleshpots of Hunstanton at the weekend with me riding pillion. We either went to the large outdoor swimming pool or to the flicks followed by fish and chips.   We lived in a social whirl! One evening, we emerged from the cinema into a dark and rainy evening. We decided to forego the night life and head back. The return to Bircham was narrow and windy with high hedge rows and no street lights. After about 10 minutes we hit something in the road, the headlight ceased to illuminate, and we mounted the grass verge, went through the hedge and landed in a field. It was pitch black as we staggered to our feet, not knowing whether the dampness was blood or precipitation.  Luckily it was the latter. We exited the field as we had entered and after a sharp blow, the light on the scooter earned it’s keep, and we finished our journey. After pass out, we went our separate ways, and it was only sometime later that I heard that Johnny had been killed by a falling tree on jungle training in the Far East. RIP J Campbell.