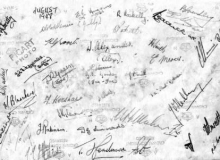 Text Of A Letter From Wg Cdr DS Terry AATS Bircham Newton dated May 1962, to the parents of an Admin Apprentice Trainee

I am sure that your son has now written to tell you his first impressions of the Administrative Apprentice Training School at Royal Air Force Bircham Newton.The object of the school is to train apprentices to the advanced level in an R.A.F. trade and to give them additional general education to fit them for a progressive career in the Royal Air Force. We also pay considerable attention to the further
development of character and do our best to foster integrity and willing acceptance of individual and communal responsibility; during the period the boys are at the school.
The Apprentice Training School is run very much on the lines of an ordinary boarding school, but with a military flavour. Under the supervision of my staff, carefully selected senior boys are given responsibility towards the younger ones. Each apprentice is considered for one of these posts of responsibility towards the end of his first year at the school.
Your son is now a member of 46 Entry, and for the first few weeks at Bircham Newton, until he has received all his kit and uniform, he will stay with the other apprentices who arrived at the same time. They are all under the care and guidance of an experienced officer and several of our most reliable senior apprentices. At this stage we frequently find that boys who are not accustomed to being away from home become somewhat homesick. This is quite natural and. we endeavour to do all we can to overcome this feeling and try to ensure that they settle down as quickly as possible When your son is fully kitted he will begin his formal trade training. This is carried out by experienced instructors under the guidance of a specia1ist officer. Considerable time is devoted to educational teaching and I have a staff of experienced university graduate school teachers to do the job. When your son has passed his final educational examination he will be eligible for awards from the Royal Society of Arts.
Apprentices are given generous leave ‘while they are at Bircham Newton, which is arranged to coincide as far as possible with normal school holiday periods, We are also able to arrange mid-term breaks of a few days during the middle of our terms, At holiday time all our apprentices are expected to go home and are not allowed to go to any other address unless we have your written consent.
The pay of apprentices, particularly in the latter stages of their training, is quite generous and we take definite steps to encourage thrift. A Post Office Savings Bank account is opened for each apprentice soon after he arrives. His deposit book is held by the House Commander and except for very special reasons it is not returned to the apprentice until completion of his training. At this stage each young man should have a substantial sum to his credit when he leaves the school to take up his new post. In addition we withhold a small portion of his pay each week until he goes on leave when he will draw an accumulated sum which we expect will be sufficient for his needs on holiday.
Apprentices over the age of 16 are allowed to smoke provided the parents do not object. Therefore a smoking pass will be granted to your son provided he is over 16, and also provided you give your written approval. I must add that we do not encourage over indulgence in smoking, which we believe is not in the interests of health and physical fitness.
We find that co-operation between parents and the school staff plays a very important part in training’ and I hope that if any problems do arise you will not hesitate to let me know. We like to keep parents notified of the progress of the sons and my Chief Instructor will send you reports at the end of the first three of the five phases of training. If there is anything else you wish to know please do not hesitate to write to me.
I am enclosing a letter about our Open Day on May 23rd, which has already been sent to parents of the other apprentices. I should be delighted if you are able to come and will be grateful if you will fill in the attached paper and return it to my Adjutant as soon as possible.